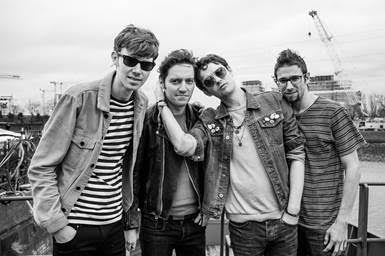 Since their formation in 2014, Sisteray have been bringing their punk ethos to sold out venues up and down the country, performing pop-up guerrilla gigs, organising their own club night ‘Welcome to the Monkey House’ where they book the bands, promote the gig and often DJ, and have played roof raising sets at Camden Rocks and the Isle of Wight and Leeds festivals.

Upbeat melodies and observations of 21st century Britain show a band not afraid to voice their disaffection towards the establishment and political elite, so much so, that guitarist Dan Connolly was asked to appear on BBC News and ITV along with The Independent, to voice his views on the recent Syria debate. Sisteray were also recently invited to perform at the 40th Anniversary of Rock Against Racism.

You can listen to Sisteray’s single, “Queen’s English” below, and keep an eye out for their new album 15 Minutes out on April 14th via Vallance Records.