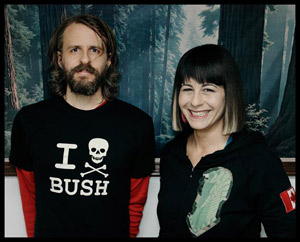 “This one’s for all the misfits of the world. The square pegs, the don’t fit ins, the out of steps, the misunderstood, the heads in the clouds. And this also goes out to all the also rans out there, the could’ve beens, the would have beens, the left behind, the out of times, the lost in the crowd.” – “An Ice Cube in the Sun,” Quasi.

Mole City is not in the tradition or deviating from the tradition – it is the tradition. After 2 decades of launching drums, guitars and pianos through the shifting interzones between harmony and chaos (moonlighting along the way with the likes of Sleater-Kinney, Wild Flag, Elliott Smith, Built to Spill and a long list of others), Quasi are a genre of their own – they write songs in the style of Quasi, and Mole City is the Quasi Song Book: Parlor Sing-alongs for the Last Century.