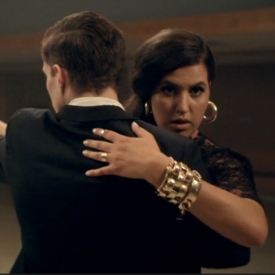 The Danish duo of Coco O & Robin Hannibal, best known collectively as Los Angeles-based Quadron, are set to release the Hey Love Remix EP on November 1st as the follow up to their Vested In Culture / EPIC release, Avalanche, from earlier this year.  The first single, “Hey Love”, a collaboration with British producer Fraser T Smith (Adele, Florence and the Machine), received the rework treatment from some of dance music’s biggest up and comers – Classixx, Ryan Hemsworth, Branko, Sinden and Balistiq – adding their own unique takes on one of the catchiest pop tunes from 2013. Starting with the first release of the Classixx remix, Quadron will be releasing one track a week until November 1st.

Quadron’s music has been featured this year in the network television shows Grey’s Anatomy, Mob Wives and recently on ABC’s hit show, Revenge, alongside their contributions to the soundtracks for The Great Gatsby and Think Like A Man. Quadron  already count Jay Z, Adele, Mark Ronson, Jessie Ware and Tyler the Creator as fans.