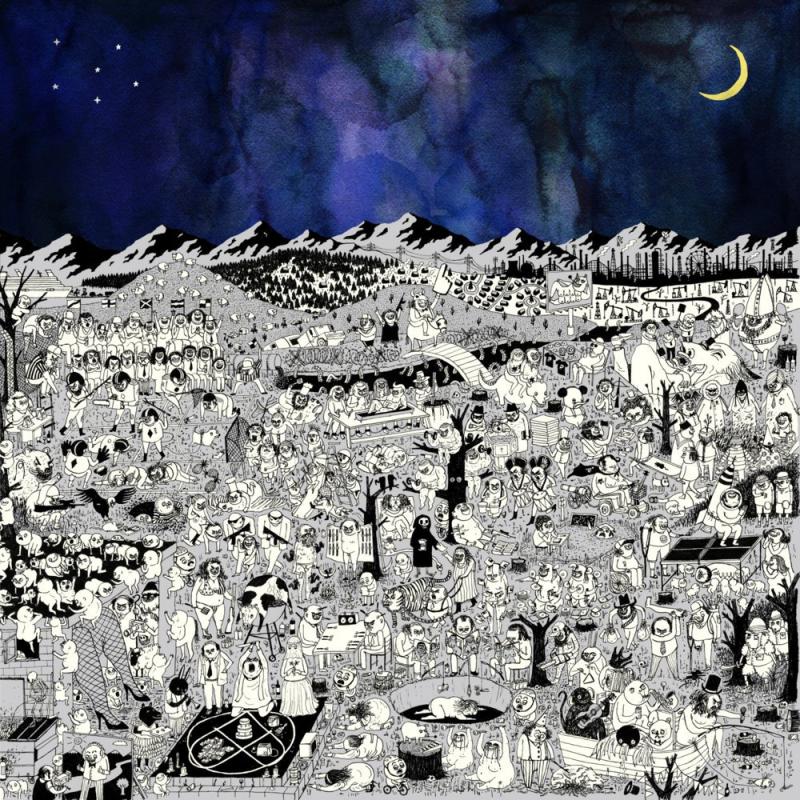 Josh Tillman AKA: Father John Misty is a very worried man. While his previous records always had plenty of commentary and darker feelings, there’s something overwhelmingly negative and concerned on this record that seems ironically titled without a dark enough sense of humour. Crafting memorable instrumental moments, especially thanks to some orchestral sounds, Tillman’s latest outing is a harsh look at a future already here, with a lot of down-beat energy elevated by crushing composition. Between it all though Tillman may need to lighten up a bit if he hopes survive not only as a musician but in the world as a whole.

There’s something immediately classic about “Pure Comedy” in its mixing of Elton John meets talking about mundane life, with the booming compositional moments to boot. Between taking about the humour of relationships and religious fanatics, there’s an emotional instrumental climax that erupts with saxophone at the height of its intensity. “Bedding Taylor Swift/Every night inside the Oculus Rift” is definitely a bold way to open a track, but given the future fearing commentary of “Total Entertainment Forever” it is the most powerful way as well. The song somehow fits in both a happy and sad feeling into its piano, and the flaring saxophone takes it all the higher.

“Things It Would Have Been Helpful to Know Before the Revolution” shuffles along on its melancholy filled verses until it shifts into its chorus with a Beatles/Foxygen-styled orchestral screech. The post-apocalyptic lyrics have an eerily pre-apocalyptic double-meaning, making it clear Tillman has a lot of dark views about our world. Shifting to an even deeper sadness on “Ballad of the Dying Man” which recounts all the worries left of anyone dying, who’s spent their time critiquing rather than acting. Melodically haunting, Tillman is truly beating his technology and future hating horse to death on this record, while always sharp and accurate, starts to feel less fresh than the angelic vocals that close this track.

“Birdie” snaps open on rumbling bass and weirdly time-affected sound clips, before Tillman’s vocals seep in. The highlight of the track however is the instrumental breaks and dramatic background collapse of a string section into a delightful nothing. At thirteen minutes “Leaving LA” is purely for the die-hard fans, as its strong writing but lack of any big shift melody-wise makes it a very extended take on a simple idea, while lyrically pushing harder than any other track on the record.

The light self-harmonies on “A Bigger Paper Bag” intertwine with the weird organ-sounding strings in an effective way. Talking about kings on cocaine and the issues of self-identity, between xylophone hums and a satisfying keyboard entrance, Tillman crafts something truly memorable here. “When the God of Love Returns There’ll Be Hell to Pay” cleverly denies rhymes and perfect music resolves, while talking about the bleakly hateful world we live in, between the deathly vocal cries in the background.

Bouncing a Beach House sounding melody over a slide guitar, “Smoochie” moves along with a somewhat redundant verse for the record. Saved however by its instrumental chorus moments, the choruses are pure bliss left to lift something more mundane. The clever argumentative lyrics of “Two Wildly Different Perspectives” go from sadly different to scarily similar to do evil. By this point in the record with the absolute dread behind the music and lyrics, it would be refreshing to see Tillman have some brighter moments, as the sadness quickly becomes numbing.

“The Memo” critiques art, self-worth and brings one of the most appropriate round-ups of his societal and technological fears. Descending into digital hell himself along with dying robots (sounding a lot like people getting absorbed in their phones) he finds the perfect crossroads of commentary and art in this powerful moment. Going for another long-haul on “So I’m Growing Old on Magic Mountain” moving slow with a creeping background instrumentation until it’s cutting distortion in the middle, shaking speakers in its low-end rumble. The instrumental break beautiful and long, echoes the perfect change, making this track not feel like such an overdone slog.

Closing on “In Twenty Years or So” there’s a distinct note of hope in Tillman’s words, taking in the joys of life, like a Talking Heads track. The instrumental cuts bring overwhelming closure to the record before he acknowledges that the real joy only comes from taking none of it seriously. The track also takes everything Tillman has done overindulgently on the record and shrinks it into a concise package that once creates this closure in its recalling moments.