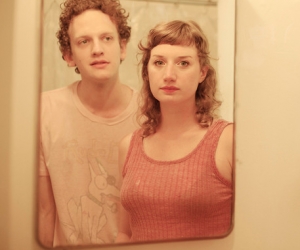 in the case of guitarist Daniel Hindman and keyboardist Sarah Versprille’s Pure Bathing Culture, who today share single “Pendulum,” off their forthcoming full-length debut, Moon Tides. “Pendulum” is a perfect mid-tempo album opener that pulses and shines, and other standout tracks from the album — “Dream The Dare”, “Twins”, “Scotty,” and “Golden Girl” — are slices of reverb-drenched, soulful, danceable electro-pop, that musically and lyrically tap into an introspective worship of the natural and psychic mysteries that surround us. Partisan Records will release Moon Tides on August 20th and the band will share songs from the forthcoming album on tour with Father John Misty this summer.

Having backed folk rock revisionist Andy Cabic in Vetiver, the New Yorkers partnered up and moved West in 2011, settling in Portland, Oregon. Building off their past experiences as musical collaborators, in a short time the duo have created a sound that is undeniably their own: soaring synths, chiming keyboards, and shimmering electric guitars move in lockstep with bouncing drum machines. Sarah’s crystalline voice floats on top of it all with divine purpose. It’s a sound that looks back momentarily for inspiration — Talk Talk, Prefab Sprout, Cocteau Twins — but then fixes its gaze firmly on the present.

Further developing the sound of their acclaimed four song, self-titled 2012 EP, at the start of 2013 they set out to record Moon Tides, their first full length album. Again, they chose to work with producer Richard Swift at his National Freedom studio in rural Cottage Grove, Oregon. Throughout 2012 Swift had called on the duo to help him with other studio projects (Versprille sings on Foxygen’s latest LP and Hindman adds his sprawling guitar work to Damien Jurado’s “Marqopa”.

Like the earlier sessions for the EP, they worked quickly in the studio and improvised parts around the basic song structures that they’d carefully composed up in Portland. Dan explains, “Pretty much all tracks (vocals and instruments) are all first or very early takes. Richard is kind of a stickler about this and I actually don’t go in with a clean, pristine idea of what I’m going to play on guitar or any other instrument for that matter, so there’s actually a lot of improvisation as far as performances in the studio go.” The results, like the earlier EP, are astounding: the arrangements feel fresh and imaginative, the melodies are unforgettable and the finished songs, most importantly, feel intensely human and deeply spiritual.