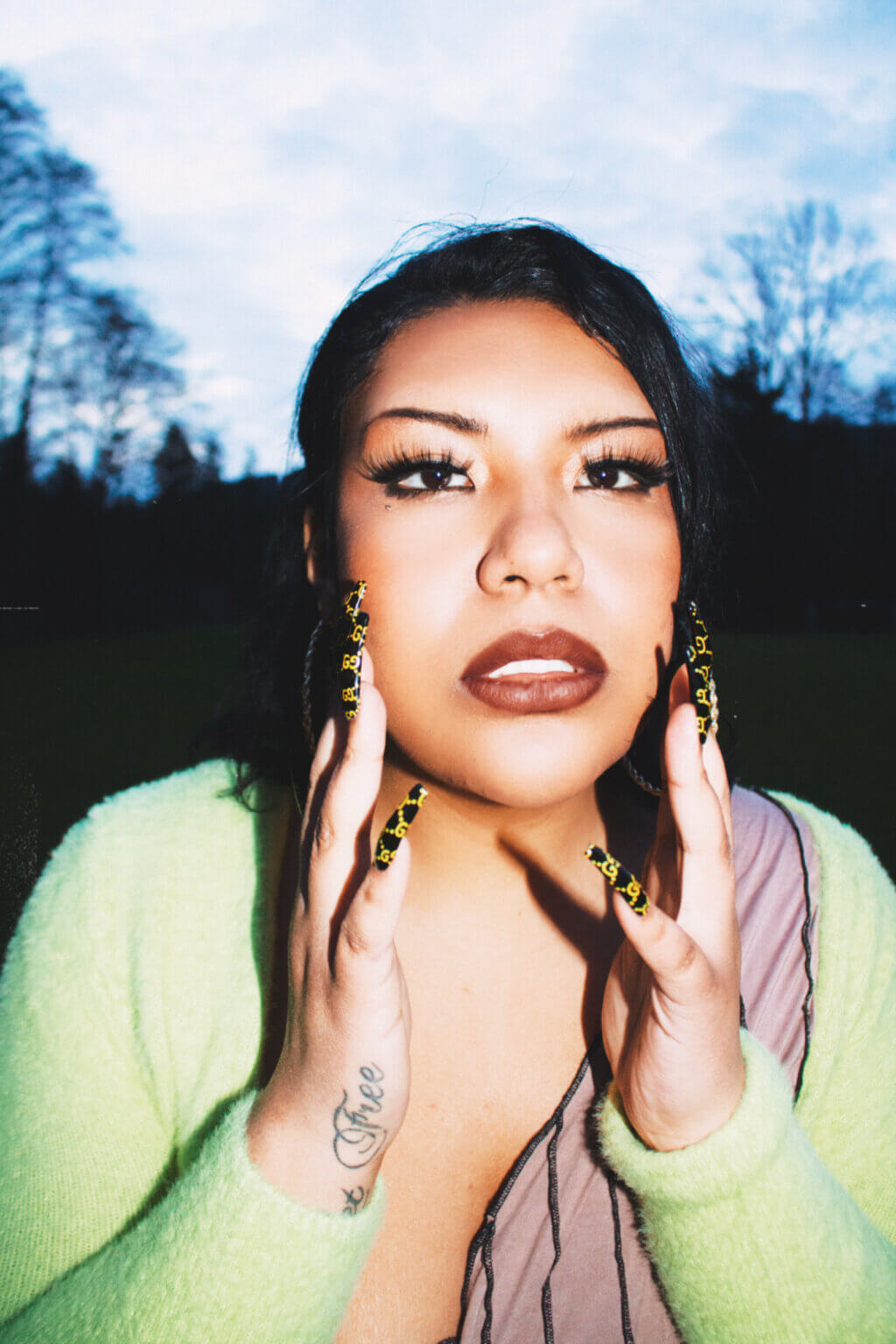 Inspiration can hit you in the strangest of places. For Los Angeles-by-way-of-Vancouver artist/producer Prado Monroe, side-eyeing a deluxe designer store while sitting in traffic led to the chance creation of her most recent and arguably hookiest anthem yet, “Gucci Store.” An exercise in manifest destiny, the bag-grabbin’ “Gucci Store” is a big ticket banger.

The single is also part of Prado’s springtime renaissance, alongside her Elastic collaborative EP with Vancouver producer Zack Treble, a.k.a. Z.D.B.T. All told, Prado‘s recent run of singles comfortably flits between pop and hip-hop (“Gucci Store”), the body-moving boom of vintage Miami bass music (“Elastic”), and capricious, all-night acid house (“Mean Boy”). All this is to say that the multi-hyphenate’s music is catching on across streaming services. She’s inspiring TikTok dancers, too, and even trying her hand at some fan-made choreography for “Gucci Store.”

Ahead of officially announcing an upcoming solo EP, Prado caught up with Northern Transmissions to discuss “Gucci Store,” crafting grand-scale pop for club kids, and—at least in terms of a good hook—how vibe trumps a spell-check every time.

Northern Transmissions: “Gucci Store” is your first solo single of 2021, coming off last year’s “Stephen” and “Men in Black”. You’ve called the song a capitalistic pop banger, but also made mention that we shouldn’t be taking the Gucci theme that literally, either. What’s the background behind the making of the song?

Prado: I literally wrote the first line in my car on my way home from work, when I was a receptionist in downtown Vancouver. You know the Gucci store on Robson, near the art gallery? I was in the turning lane listening to the clicking of the turn signal, and started singing [about how] I want to be able to have the freedom to go buy the whole damn Gucci store. I ended up running home and just making that first lead synth line; I produced the whole thing in a day. It’s a capitalistic bop, but it’s also a track about strength and resilience— getting through this chapter to see yourself [arrive] somewhere better.

NT: Was there any worry that you wouldn’t make it home in time to lay down what was in your mind?

P: I whipped out my voice notes and sang the melody of the first couple of lines, and ran to the studio. I have a studio that’s about a block away from my house that my sister and I made. I went there, like, ‘ok, I need to produce this now….today!’ I sent it to Franco, one of the other producers on it, that night.

NT: What kind of a keyboard did you bang that out on?

P: It was just done on an Akai, but then we added more expensive textures, which bring the song up some more. I had a big vision for it: those expensive synths, the chain noises, all these sound effects. A lot of my stuff—as people will start to hear as more stuff comes out—is very epic-sounding. Cinematic.

NT: One of the most memorable lines of the track has you misspelling glamorous: “G-L-A-M-R-O-U-S…”

P: That was actually genuine stupidity [laughs]. I’d spelt it out to fit the bars. When we were doing the final master, Zander, my engineer, sat me down and was like, “do you hear anything wrong with this?” but I was like, “not a damn thing. What’s up?” When he told me I had spelled glamorous wrong the first time, I was like, “let’s keep it in the record!” That was pure stupidity jumping out, but I thought it was cute and funny. Fergie can’t come for us now, since I spelt it wrong [laughs]. I spelt it right the next time, though.

NT: This is maybe getting too literal with “Gucci Store,” but are you up on any of the House of Gucci drama, this unsanctioned Ridley Scott movie [about the murder of Maurizio Gucci]? The Gucci family themselves are not in support of it; they aren’t into the casting decisions…

P: No, I don’t give a fuck. The whole point of “Gucci Store”, for me, is taking something that’s so stupid and wrong—I know Gucci has [done] so many fucked things— and [making] it my own. I’m stealing their monogram, their namesake. I know they’re super controversial [but], honestly, they wouldn’t back my shit anyways. My team sent a pitch to them, just to let them know. They’re doing this North Face collab stuff now, which I think is corny. Not high-fashion, whatsoever. I don’t know those motherfuckers; they’re not giving me shit [laughs]….Weird company. It just happened that I saw the Gucci store. It could’ve been any designer.

NT: You’ve been making beats since you were a teenager, then under the AlienKanye. How has your production evolved since then? Like, what sounds are you interested in at this point?

P: The sounds I’m making now are theatrical. I’ve always had an affinity for making things sound grand, or haunting, [but] now I’m starting to see this shift—Epic, very pop. I’ve worked on it so much over the years. I’ve crafted a sound for myself that is so solid, I’m extremely proud of it….but I want to explore more electronic sounds, as well. I had “Elastic” [with Z.D.B.T.] come out. It’s kind of a DJ record. I wanted to pay homage to the club kid scene that brought me up; I want to make things for those kids, people looking for a new pop black girl, you know?

NT: Getting into those collaborations with Zack Treble, how did you end up connecting with him to make “Elastic” and “Mean Boy”?

P: I went to a show and heard this song—“All My Friends are Gods” by Evy. I heard the production and thought it was incredible, so I went up to her [Evy] after the show and asked “who produced this?” [Z.D.B.T. and I] found each other on Instagram that night. He invited me to [D.I.Y. Vancouver electronic studio space] Deep Blue to do a session with him. We sat down and….you know Young Thug’s “Wyclef Jean”? What’s the lyric: “Only here for one night, let me put it on your face.” That part [laughs]? I started singing “I’ma put it on your face” over and over on [Z.D.B.T.’s] beat, [then] I said, “Let’s make it grimier!” I was there for about three hours, and we managed to bang out the record. He sent it to me when I was in L.A., and I added all the ad-libs—whiny baby shit and moaning [laughs]. It’s one of my favourite records; it’s just so outlandish and stupid.

NT: There’s been a splurge of Prado-related singles this spring, between the Z.D.B.T. collaborations and “Gucci Store.” Are you in more of a singles zone right now, or is there a bigger project on the horizon?

P: Right now we’re in singles mode, just to introduce myself, but I have so much music. I could release so many projects. If you want a type of EP, I have it. I have a lot in the catalogue, [but] there are two bodies of work coming out by the end of the summer—I just won’t have it any other way.