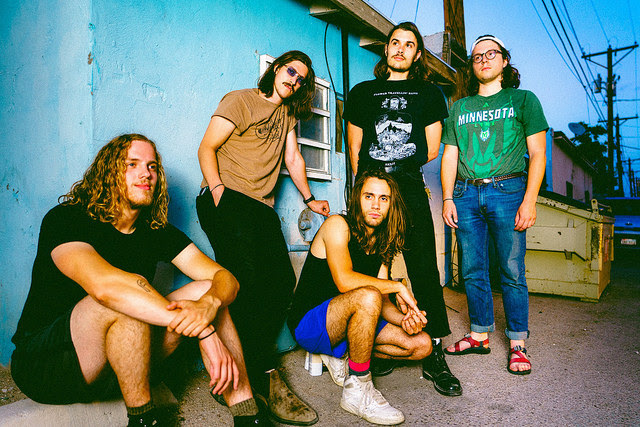 When I Think Of You In A Castle, the current release by Post Animal, almost didn’t get made. “Before this album, we weren’t sure what the future of the band was going to look like. I was considering moving to Los Angeles and Joe [Keery] was off filming Stranger Things. We didn’t know where we were all going but we knew we wanted to make an album with all of us in the same room,” explains drummer Wesley Toledo. When the band – comprised of friends from childhood, the local music scene, and hometown burger joints – found the time to go to a lake house in Michigan to record, magic happened and When I Think Of You In A Castle was born.

For a young band, Post Animal have already put some time in on the road, having already toured with Twin Peaks, Wavves, and White Reaper. Post Animal are a band of brothers. Though they formed in 2014 and just began touring in 2017, they are joined in a bond much tighter than their years suggest. Initially formed when childhood friends, bassist Dalton Allison and guitarist Matt Williams, met keyboardist and guitarist Jake Hirshland, the band’s sound began to take shape when the three enlisted some more pals from both the Chicago music scene and through their time working at local burger restaurants. Rounding out the band’s lineup, Post Animal is completed by drummer Wesley Toledo and guitarists Javi Reyes and Joe Keery.

In the summer of 2016, the band retreated to a lake house in Watervliet, Michigan to record When I Think Of You In A Castle for a week and a half. Following the lake house trip, the band finished the album at their house in Chicago with Allison perfecting the mix over the next year; even while on their 48-city summer tour in their beloved van (RIP Shannon). The finished album, which was mastered by Jake’s brother, Jared Hirshland, is a testament to not only the brotherly connection that these friends share, but also to the power of collaboration between like-minded musicians who just get one another. “Before we recorded it, it was an uncertain time for us as a band, but we all just had a magical time at this lake house in the middle of summer,” explains Toledo.