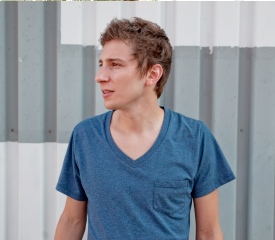 Port St  Willow’s Holiday is an expansive yet personal record that was quietly self-released in early 2012, creeping its way into the ears and hearts of listeners.

One of those people was ambient mastermind Brian Eno, who waxed poetic about the band in a recent interview with Mother Jones. “I just heard a record last month by Port St Willow…which I became completely entranced by,” he said. “I just thought how amazing that somebody could take the same few chords, pretty much the same sorts of sounds – it’s quite hard to tell what is original about it, but I just know I’ve never heard it before. It’s such a fabulous record.”

Downtown Records agreed with Eno to such an extent that they’ve signed Port St Willow and will be reissuing Holiday on vinyl, CD and through digital outlets in order to make it available to a wide audience for the first time.

The solo project of Nicholas Principe, Port St. Willow began in 2009 following a period of cross-country moves. The act’s songwriter, multi-instrumentalist and producer, Principe eventually settled down in Portland, OR where he released the project’s first EP, Even//Wasteland, in the fall of 2010.

Recorded over the course of a year in Principe’s Oregon studio, Holiday delivers on the artistic ambition of that initial material. It’s an emotionally-charged meditation on family and self – an exploration of new and old homes seen through the lens of a memory softened by distance and time.

“It felt somewhat as though it were a process of building different rooms in the same house which I could go spend time in and keep myself sane,” explains Principe about the new material. “Where Holiday plays as an awakening, “Soft Light Rush” is an acknowledgment of change, transition and the wading through these things together.”

Put The Armor On The Mantle