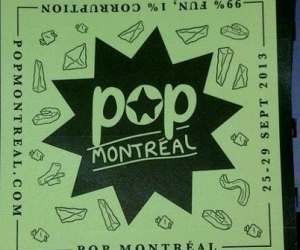 Yes it’s almost 4 months away, yes there is lots of stuff still to come, but we have a tease for you with some of the great music  have lined up for the 12th edition of POP Montreal. So mentally prepare yourselves, do your research, start feeling up, so you can get down and live all your dreams with us from September 25th to 29th in La Belle Ville!

Some of the highlights include none other than Grammy Award-winning, Beyoncé song writing, love king supreme, The-Dream, performing in Montreal for the first time. If you’re looking for legends, we have them in spades, starting with Ms. Misty Blue herself, the legendary R&B/blues queen, Dorothy Moore. Or how about dancehall king Yellowman who will battle Josey Wales, recreating their classic 1984 album Yellowman versus Josey Wales, for the first time in Montreal. Finally, two original members of Parliament, Fred Wesley and Bernie Worrell, will be on stage together for a one-time-only special show.

Alsp performing are local geniuses, including Colin Stetson, Tim Hecker, Majical Cloudz, plus the amazing Quebecois disco ruler Pierre Perpall, who you may know from the Chromeo DJ Kicks compilation. There’s lots of amazing underground discoveries like Norway’s Jenny Hval, Team Rockit from Sweden, Toronto’s DIANA, the incredible SSION from down south and Lebanon’s Mashrou’ Leila.  The list below is a taste, there will be another one later this summer so enjoy, breathe and get ready for the party!