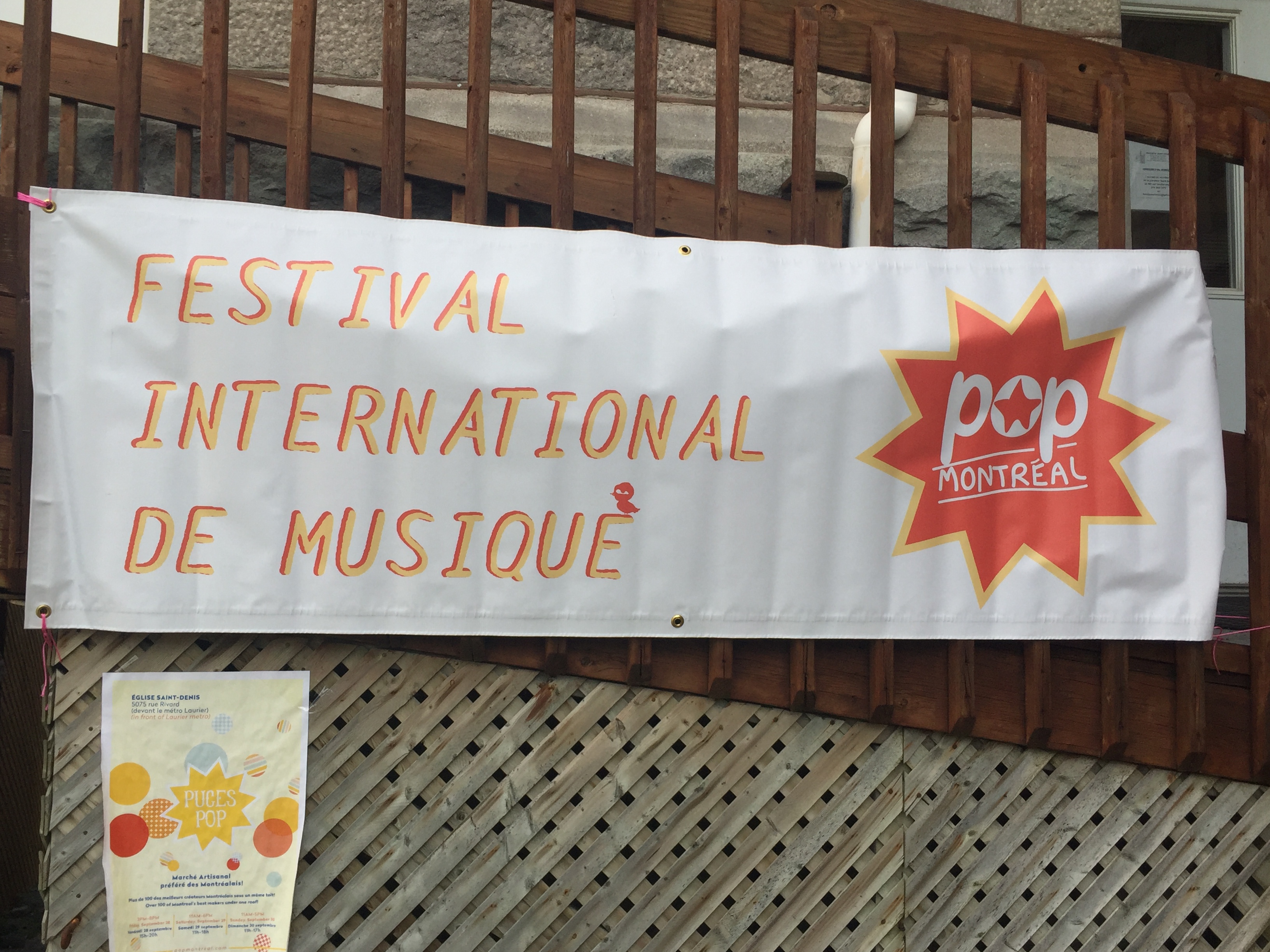 Another year of POP Montreal is halfway through, with plenty of great sets – and annoying scheduling conflicts – already having left their mark on this year’s edition of the festival. One of the biggest things about POP is not only in its ability to turn your attention toward acts you may only have a passing familiarity with (as was the case for me this year), but that it covers all end of the musical spectrum – experimental, lo-fi, hip hop, jazz, reggae, etc – and traces of all of those genres and more can be found in the first few days of the influential Montreal festival’s 17th year. Here are some highlights from the first half of POP Montreal 2018. Oneohtrix Point Never: Playing a headline show also acting as part of this year’s Red Bull Music Festival, Daniel Lopatin and two other musicians took to the stage in front of a packed crowd at the Monument-National, with his meticulous yet highly experimental and ambient soundscapes illuminating the elegant concert hall. The combination of his music, use of samples, and glitchy sound effects with eye-popping 3D visuals – sometimes state of the art, other times deliberately cheesy and outdated – made for an extremely immersive concert experience. Between flashing lights, piercing synths, orchestral arrangements, and Lopatin’s haunting, vocoder-heavy vocals (when he wasn’t performing instrumental tracks, that is), the concert became a meditative and sweeping audiovisual experience that not only fit its environment like a glove, but also blurred the lines nicely between an electronic act and a beautifully-crafted art showcase that ended with a standing ovation – not bad for the last show of their most recent tour. Clairmont the Second: This feisty Toronto rapper came through the Late Night at the Piccolo Rialto for his final show of 2018, spending most of it spitting his rhymes with a punchy style of delivery over solidly produced beats… and complaining about the crowd’s lack of enthusiasm in spite of it. While the crowd was indeed relatively sparse – he was on around midnight on a Wednesday night – he made the best of it even if people were likely tuckered out and needing to wake up for work the next morning. His bemoaning of the lack of crowd activity took away from the experience a bit, but a fun set nonetheless. Venus Furs: Despite what their name may imply, this local trio don’t have a strong Velvet Underground feel to their sound. Instead, the band took to the stage at the tiny, intimate L’Esco on Thursday night surrounded by red lighting and what the band themselves describe as “the alternative to psychedelic surf punk.” Frontman/guitarist Paul Kasner’s soft-spoken voice meshed quite well with their energetic, bass line-driven tunes with a slight ‘90s alternative rock edge to it, and was well-received by the crowd in spite of the band’s relatively early 9 p.m. start time. Caveboy: Having had the opportunity to record music in Ireland, win the Juno Master Class, and have their music featured on Orange is the New Black – as highlighted in our recent interview with their lead vocalist/guitarist Michelle Bensimon – Caveboy are a band who seem poised to keep growing in stature despite not having released a proper debut LP yet. The West Island natives perform with finesse, confidence, and a catalogue of fun, old and new-school inspired indie pop music, with a heavy influence from ‘80s new wave and pop (closing with a cover of Whitney Houston’s “I Wanna Dance with Somebody”). They aren’t afraid to let loose on stage, either; with Bensimon and bassist/keyboardist Isabelle Banos banging sticks on drummer Lana Cooney’s kit at one point in their set Thursday at O Patro Vys. With a crowd dancing and bouncing around throughout their show, Caveboy are one of Montreal’s more charismatic live bands, and proved it once again with their fairly brief 30-minute set time breezing by as a result. Sydanie and JPEGMAFIA: Late on Thursday came one of this year’s festival’s marquee rap shows, headlined at Le Belmont by critically-acclaimed Baltimore noise rapper JPEGMAFIA. Performing just before him was Toronto emcee Sydanie, whose vivacious personality shone through both in her hilarious stage banter and the songs themselves – one of which saw her rhyme forcefully over Flying Lotus’ “Camel”. Even if the crowd was mostly waiting for JPEG to come onstage, Sydanie did her best to whet their appetites with tracks running the gamut from trap to house and electronica. And then… “PEGGY! PEGGY! PEGGY!” The rambunctious and explosive rapper was a perfect fit for Le Belmont’s dark and somewhat gritty atmosphere, with the crowd going absolutely bonkers for him and his loud and aggressive delivery. His screaming may have overpowered the already frantic and bass-heavy beats themselves, but it worked nicely in his favour, amping fans up with freestyles, compliments toward Canada’s quality of marijuana, and even a brief singalong of Clipse’s “Keys Open Doors” when he found someone’s lost keys onstage. The emcee born Barrington Hendricks wasn’t afraid to throw shade, either, with Kanye West, Donald Trump, and notably Morrissey all drawing his ire – underlined with a rapturous performance of the aptly titled “I Cannot Fucking Wait Until Morrissey Dies”. If his live shows – and the response he gets from them – are anything to go by, JPEGMAFIA’s stock is sure to only continue to rise. Badge Époque Ensemble and Bill Callahan: This side-by-side pairing was a tale of two extremes during this sold-out night at the Rialto Theatre. Prior to veteran singer-songwriter Bill Callahan taking the stage, experimental avant-rockers the Badge Époque Ensemble entertained with a percussionist, drummer, guitarist, bassist and flutist performing jazz-tinted instrumental numbers in front of a quiet yet receptive crowd. Their jammy rhythms and progressive song structures would stand in huge contrast to Callahan’s considerably more stripped-down affair that was to come, but it emphasizes how eclectic and wide-ranging POP’s roster of artists can be.

As for Callahan, his set would consist of little more than him and an acoustic guitar while another musician noodles on his, though his penchant for frank story-telling and folky alt-country tunes coupled with his low-pitched, somewhat grumbly voice worked extremely well with the intimate yet expansive Rialto. What I saw of his set was a mature, earnest display of a talented and underrated artist 14 albums deep into his career, with his accompanying guitarist adding a great sense of depth and duality to the performance. With that, however, I had to deal with one of the festival’s harsh realities: scheduling conflicts. Therefore, I ran over to the Fairmount Theatre to catch another major veteran act on this year’s bill. Speaking of which… The Charlatans UK: Arriving at Fairmount midway through this legendary ‘90s band’s set, The Charlatans – erm, The Charlatans UK, that is – put on a hugely entertaining and groovy show in front of a receptive crowd who shimmied and shook throughout. Rocking a pair of overalls and one hell of a blonde bowl cut, their hypnotically-voiced frontman Tim Burgess sung and swayed his way through old and new material, though the entire set was emblematic of the Britpop and Madchester sounds they’d been known for during their heyday. With major hits back home like “The Only One I Know” and “Then” played alongside more recent cuts like “Come Home Baby” and “Plastic Machinery”, the West Midlands band put on one of this year’s festival’s most sprightly and flat-out fun sets to date.