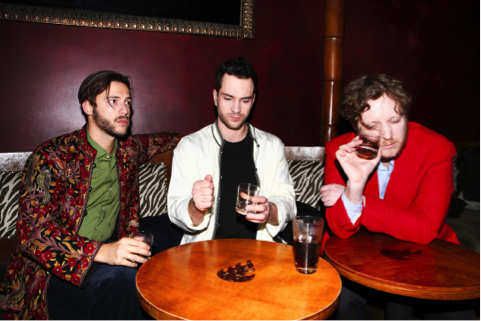 The video for “Pasadena” from the Russian band Pompeya. The band explains talks about the video: “While we were in Pasadena only once in our lives, the meaning of the place is like so many others. You have an idea of what a place is, and create a new context for it with your imagination. The name sounds romantic, almost cinematic. Again, completely removed from what the place itself may be in reality…We’ve created our own romantic reality in its place.” “Pasadena” is off the band’s latest release Real, out now via No Shame. In addition, limited edition vinyl of Real will be available July 31st.

Real was co-produced by Brian Mctear (Local Natives, War on Drugs, Twin Sister), vocal producer David Hartley (War on Drugs) and was recorded in Philadelphia, New York City, Savannah and Orlando—all places, Pompeya had never been before. Of the process, the band explains, “Our work from the Tropical era was our interpretation of the music we liked. By mixing new wave, disco and funk, we created music we understood would be sunny, light and fun. It was all recorded in Moscow without much outside help from producers, engineers or lyricists. For the new album, we wanted to create music with a larger message, for a more global audience. We were forced out of our comfort zones, forced to experiment more and discuss serious topics like growing up, loss, fatherhood and staying true to yourself without going crazy. These are the real stories of our lives, and the real sound we want to present. This is Real.”

“All Things New” The Building