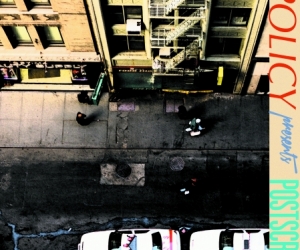 The latest release from 100% Silk, a label that seems to have a preternatural ability for discovering and releasing extraordinary music. On October 1st, NYC-based producer Policy will release his new EP Postscript. The first single from the 12″ was released this week is “Postscript 187”.

To label Policy’s music as ‘house’ misses the point entirely – it careens smoothly through territories occupied by jazz, avant-garde, electronic, latin groove, and Afro-beat, carefully selecting the hallmarks of each genre and delivering it as an elegant, yet dance-able, collection of moments.

Since debuting barely three years ago under the Policy moniker, the California-born multi-talented producer Francis Hsueh has chosen quality over quantity when releasing his material. It’s easy to describe the music found on the Postscript EP as ‘immersive’, ‘nostalgic’, or even ‘uniquely-composed’, however it’s Hsueh’s ability to bring together innumerable, seemingly disparate, musical elements in an amalgamation that is just as effortless-sounding as it is memorable.

Policy, aka Francis Hsueh has been a musician his entire life and plays the piano, flute, and guitar. While pursuing a predictable career path in New York City, Hsueh decided to quit the daily grind to focus on filmmaking, going on to co-write and co-direct two feature-length films. He also jumps between being a family man with two kids and working in the legal profession.

Hsueh’s music is undoubtedly inseparable from his love of film. His unyielding passion for beats was first ignited after an unsuccessful attempt to obtain rights to an Aphex Twin track. This inspired the artist to begin creating his own electronic beats. Bottling up restless disco, steppy house and everything from Italo to techno, his sounds are lush, yet punchy, and quirky while retaining emotion. Fun, but functional.

Coming from a traditional instrumental background, Hsueh turns to his vinyl DJ set and analog/outboard elements to foster a textured and visceral sound that envelops the listener in a warm disco-daze. Although he admits he does not “completely ditch the laptop,” his music escapes an overly produced sound and instead, plays effortlessly, unfolding in ambient waves.

Citing influences like Radiohead, Bjork, Miles Davis and the Dances With Wolves soundtrack, Hsueh’s sounds blend elements of various genres to create a fusion of sound and energy. The influence of jazz and rock present themselves as structured and accessible. The music unfolds in an unpredictable yet relaxed manner while Hsueh guides his listeners through his ever-evolving sounds and pulses.