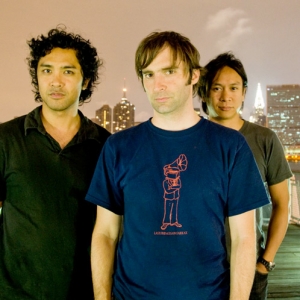 New York trio, +/- {Plus/Minus}, have announced their return with a new full-length album, Jumping The Tracks, out February 4 on Teen-Beat and have offered up the lead-track off the record, “Young Once”. Fueled by a continued passion to create, James Baluyut, Chris Deaner and Patrick Ramos, recorded Jumping The Tracks whenever time allowed, bending around life’s other obligations of family and day jobs. The result is the band’s first album truly written as a band, driven purely out of a love of performing together in the studio. The follow up to 2008’s Xs on Your Eyes, also marks a return to the band’s original home of Teen-Beat, who released the band’s 2002 debut, Self-Titled Long Playing Debut Album and 2003’s You Are Here.

Jumping The Tracks is a collection of pop songs with the +/- {Plus/Minus} trademark emblazoned on them-polyrhythmic percussion, glorious harmonies. Appraising the finished product, Baluyut says, “The album does suggest a battle against cynicism and darkness in one’s life. It’s easy to get overwhelmed by these things post-your-idealistic twenties and thirties.” It brings to mind a statement made in the early ’80s by R.E.M.’s Peter Buck, that “making music isn’t a career choice, it’s a calling.” +/- {Plus/Minus} would certainly agree, having labored over an album for years in an attention-span challenged and oversaturated musical climate that favors the flavor of the month and easily digestible MP3 singles.

In the weeks leading up to the release of Jumping The Tracks, +/- {Plus/Minus} will offer up the source, multi-track drum recordings for each song from the album on the Blend.io allowing fans and music creators to use them as starting points for their own music interpretations. To join, visit http://blend.io/vip/plusminus and sign up with the exclusive invite code PLUSMINUS.

04. The Space Between Us