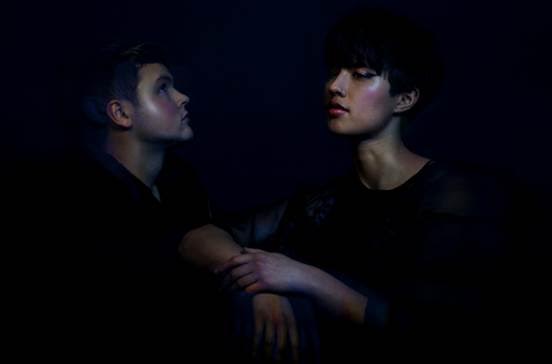 Plaitum (Abi Dersiley and Matt Canham) create a world of obsession and death, sex and psychosis, and charged, dark electronic pop. The multi-instrumentalist pair have been friends since childhood, having met aged 11, at school in Colchester, and bonded over their shared love of Massive Attack, Talking Heads and old horror films. Last year they signed to Wolf Tone, the record label founded by Paul Epworth, and began work on their forthcoming debut album, with Canham at the controls at the famous Church studios in North London’s Crouch End, overseen by Epworth. They released their debut, self-titled EP last winter, followed by the Jagwa EP this past summer.

Split into three parts separated by interludes, Constraint begins by introducing an unbalanced relationship in “Reeling” – a song about celebrity stalking and unrequited obsession – and works its way towards “Still In The Water”, in which the narrator realises the relationship is doomed and attempts to find closure. Between that are moments of emotional release (“Yearning”), one night stands (“Ovation”) and attempting to make do in the aftermath of a break-up (“Sway”). Closer “Eagle” has a mood all of its own. Spacious and uplifting in comparison to the rest of the album, it gives the impression of coming out of a K-hole with your head above water for the first time, feeling safe.

With opaque lyrics and Abi Dersiley’s honeyed vocals distorted and disguised by Matt’s abrasive walls of sound, Plaitum are constantly lifting up veils to reveal more veils, never quite giving you a concrete idea of where you stand. “We’ve always been set on hiding dark, sadistic fucked up stories in pop,” Abi says, “Trying to portray stuff in a way that people don’t realise they’re listening to something that’s based on a bad experience or Ted Bundy or whatever. To explain every song would be missing the point… it’s like a joke, almost. It makes people feel kind of dirty, in a way.”