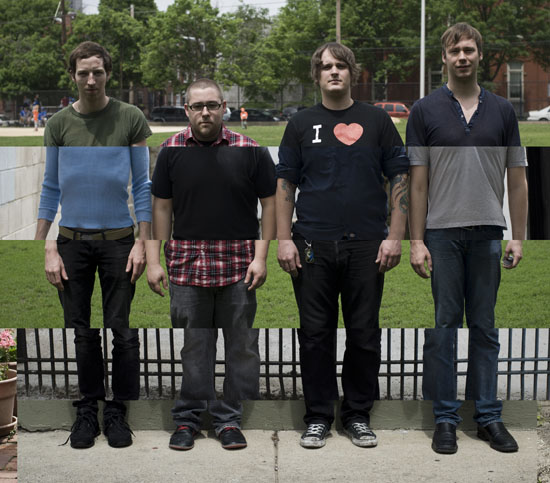 ‘Pissed Jeans’ fourth album, ‘Honeys’, is out worldwide on CD, LP and digitally via Sub Pop. In celebration of the album’s release, the band has premiered the video for “Bathroom Laughter” on YouTube.  In the clip, director Joe Stakun (Future Islands, Japanther, Modest Mouse, Adult Swim) stages an informercial-gone-wrong, and features individual cameos from the members of Pissed Jeans along with Mark Proksch (The Office; K-Strass), Philadelphia wrestler Dragonfly, and Liz Lee (My Life as Liz).  As an added bonus fans can chat with members of Pissed Jeans today in the YouTube comments section from 12-12:30pm ET / 9-9:30am PT

The previously reported Pissed Jeans spring tour in support of Honeys will begin April 12 in Washington, DC at Black Cat and currently ends on April 20 in Madison, WI at Der Rathskeller (at University of Wisconsin).  And later this week, the band will play a hometown album release show on February 15 at Underground Arts. More tour dates will be announced soon. Please find a full list of tour dates below.

Pissed Jeans’ Honeys features the singles “Bathroom Laughter” and “Cathouse,” along with stand-outs “Health Plan,” “Loubs” and “Teenage Adult.” The album was recorded by Grammy-nominated producer Alex Newport at Milkboy Studios in Philadelphia.