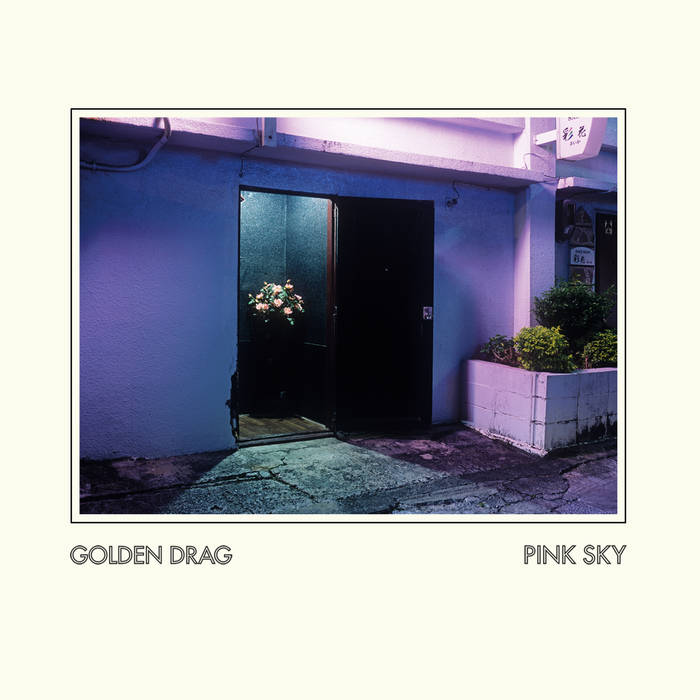 Jiwani began Golden Drag with other musicians in mind. His intended collaborators were musicians he’d met while on tour over the years. But they became busy, so he finished the songs on his own. He aimed to write concise songs in Golden Drag. Reasonable speculation says this owed to time constraints on the road. But Pink Sky’s nine tracks don’t move in linear directions for very long. They mirror his wandering reflections on transitioning from early to late adulthood.  Pink Sky opens with the line, “Meet me in a dream. Show me every shape my mind can see. Paint a perfect scene.” Right away, on this track, “Slow Explosions,” Jiwani seeks escape. The song’s hazy, poppy melody floats up like a billow of pot smoke, with a head-in-the-clouds guitar solo.

The fizzy, blossoming freak-out of the synthetic “Aphex Jim” recalls Stereolab. “Aphex Jim” might be closest Jiwani comes to realizing his original plan. He managed to wrangle Nate Dionne of Glocca Morra and Dogs on Acid, Laura Hermiston of Twist, and Julie Fader of Chad VanGaalen and Holy Fuck for the song. “Aphex Jim” demonstrates this project’s attention to process. He challenged himself to write the song without a guitar or live drums. Here, he takes no pleasure, and he’s passive: “Eat a five-star meal for aesthetic appeal. It’s a thing to do,” he sings before leaving it up to the person he’s speaking to to “Pick a name for me to define my routine. Anything will do.” The pop-punk “Bad Timing/Neon Phase” rips so hard, it blows out like a tire. The fidelity degrades until the song becomes indecipherable. (In that way, the song plays like a call- back to “Complaint Rock” from Greys’ first album, 2016’s Outer Heaven.) On the head- bobbing “Super Champs Theme Song,” Jiwani asks, “Do you want to be excited? Do you want to be delighted?” The song comes off like a parody, as cheeky as Blur’s mock- take on grunge, “Song 2.”

As Jiwani tells it, many people of his age and ilk do little to change their stations in life. On “Caught Leaking Light,” he sings the loaded lines: “Out of my mind, dyin’ all the time.” “Had somewhere to be. Don’t wait up for me.” “Have one more drink, and we’ll all be swimmin’ soon.” “Everyone at my age maxed out at just okay. Mouth movin’ nonstop with not a lot to say.” If it wasn’t for these lines about settling into one’s late 20s and early 30s with a cycle of unfulfilling work, partying to numb the monotony, and regretting it, “Caught Leaking Light” would be a chill party-rock song. That’s not to mention the closing minute-plus of placid drum & electronics instrumental. Jiwani tacks on unexpected, even unfitting instrumental outros elsewhere on Pink Sky. Hear the final minute of garage-y psych-pop song “Shoot the Breeze” and “Fastball Special.” On the latter, he sings, “Call me at home any time.” But given how aware he is that these songs sound fun on the surface, his invitation doesn’t sound genuine.

Golden Drag’s Pink Sky fades out with “Loom.” The guitar strums are sparing. The bass line is simple. The drums are so faded and basic, they could have emanated from a drum machine. If he didn’t spend the rest of the album criticizing complacency, he would sound romantic when he sings, “Sit and watch the rain with you just to pass the time.”  Despite Jiwani’s intentions, Pink Sky feels like a patchwork of ideas that are not quite cooked yet. Like the lifestyles he sings about, he seems unsure where he’s going with these songs. Or he knew where he wanted go, but he didn't quite find his way on his first try.