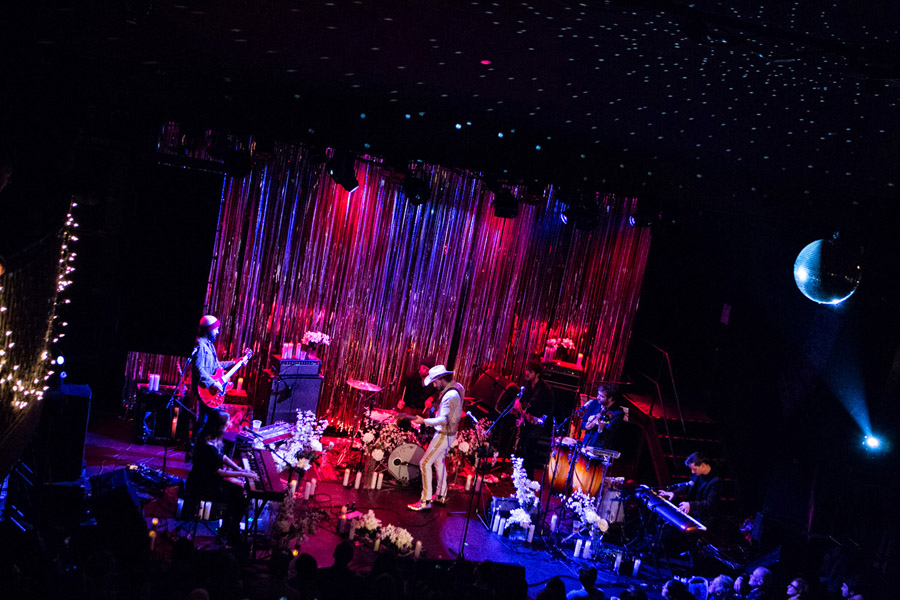 As previously announced, Phosphorescent will be releasing a 3xLP live album, Live From The Music Hall, on February 17th via Dead Oceans, chronicling their four night stand at Brooklyn’s Music Hall of Williamsburg. Culled from the four-night stand (one being a solo performance by Matthew Houck). Live From The Music Hall showcases the ways in which their vast catalog of songs evolved over the course of their nearly year-long tour in support of Muchacho, and features songs covering nearly 10 years and four albums. The Phosphorescent live line-up here features Ricky Ray Jackson on guitar and pedal steel, pianist Scott Stapleton, drummer Christopher Marine, bassist Rustine Bragaw, percussionist David Torch and organ / keyboards player Jo Schornikow.

Previously, the band had shared the expansive 10-minute live track, “Los Angeles.” Today, Houck and company share the exuberant and driving “Nothing Was Stolen (Love Me Foolishly),” off 2010’s Here’s To Taking It Easy.

Of “Nothing Is Stolen (Love Me Foolishly),” Houck had the following to say:

“Nothing Was Stolen (Love Me Foolishly)” is probably the most straightforward four-on-the-floor-type pop song I’ve got. I wouldn’t have expected it to become a live staple but it has consistently found a spot in the sets over the last couple years.

I think of shows the same way I think of albums in that, ideally, you can establish a world and then create something like a journey within that world. That said, I rarely make set-lists because you never know what kind of vibe the evening might bring. So it’s sort of like sequencing an album in real-time; reacting to the room and the crowd and the band; and aiming for a nice arc.

Anyway, “Nothing Was Stolen” has established itself as a welcome guest on these journeys. Like an easy-going buddy who pops in and refreshes the party. Maybe lightens the mood if needed. Or maybe focuses the mood if that’s what’s needed.

Also it gives me the chance to give shout-outs to whoever’s gonna take the solos. I enjoy that bit.