Motel Radio will release a new EP ‘Desert Surf Films’ on August 12th, 2016 via Roll Call Records. The New Orleans, LA-based band today premiered the official video for and song stream of “Phasing Out” via FLOOD Magazine as a second early taste of the six song EP. FLOOD said “Phasing Out” showcases “a maturity to their writing that suggests a much older set of mind at play.” The song will be available as a digital single tomorrow, June 24th.

The ‘Desert Surf Films’ EP expands upon the breezy Americana of Motel Radio’s 2015 debut EP ‘Days and Nights,’ and was recorded as essentially two chapters, with the band first isolating themselves at Dockside Studio in Maurice, LA alongside the Vermillion River. Here they recorded three songs – “Phasing Out,” “Gimme Your Love” (called a “smooth…slow burner” by All Things Go), and “Call Of The Wild” – live to the studio’s Neve 8058 console with producer and engineers Justin Tocket and Ben Alleman. The second chapter – “Palmilla,” “Nola Blues,” and “Star Of The South” – was tracked and self-produced in Motel Radio’s uptown New Orleans neighborhood at Bear America Studios, with assistance from Joe Ceponis and studio owner Carson Thielan. The resultant six songs of ‘Desert Surf Films’ feel warm yet urgent; the sound of a young band pursuing their dreams while coming to a better understanding of their place and purpose in a big world. There’s a newly experimental edge to the songs as well, with tinges of surf-y psych rock woven seamlessly throughout.

Formed in 2014, Motel Radio was born out of a songwriting collaboration between college roommates Ian Wellman (guitar/vocals) and Winston Triolo, (guitar/vocals) that has since grown into a full band consisting of Eric Lloyd (drums), Andrew Pancamo (bass), and David Hart (keys). The band’s early writing and recording culminated last summer with the independently released ‘Days and Nights.’ The EP earned them supporting slots for national acts such as Drive-By Truckers and Kurt Vile in addition to festival performances at Firefly, New Orleans Jazz and Heritage Festival, and SXSW among others. Motel Radio was named “Best Emerging Artist” at the 2016 Big Easy Awards in their hometown this past spring. 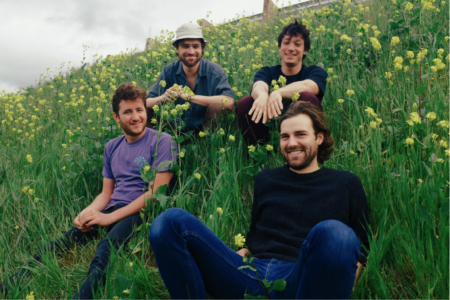