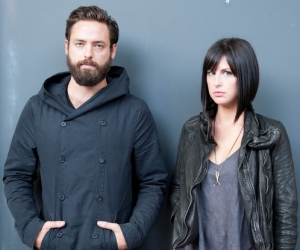 “Celebrating Nothing” offers a prelude to what’s to come from the pair. Recently wrapping up at performance supporting M83 at the historic Hollywood Bowl, they’re also gearing up for a nationwide headline tour this fall at intimate venues across the country.

This enigmatic pair will also make a return to television next week on October 3, when they perform the EP single “Black Out Days” on Late Night With Jimmy Fallon.

Recorded in Los Angeles with co-producer John Hill (Santigold, MIA), the EP kicks off the group’s next chapter. Their full-length debut Eyelid Movies [2010, Barsuk/Indica] and Nightlife EP [2011, Barsuk/Indica] established them as one of music’s most intriguing indie outfits. Soon, the likes of The Flaming Lips and Big Boi [Outkast] began seeking them out for studio collaborations. The band will release a new album in 2014.

3.The Day You Died