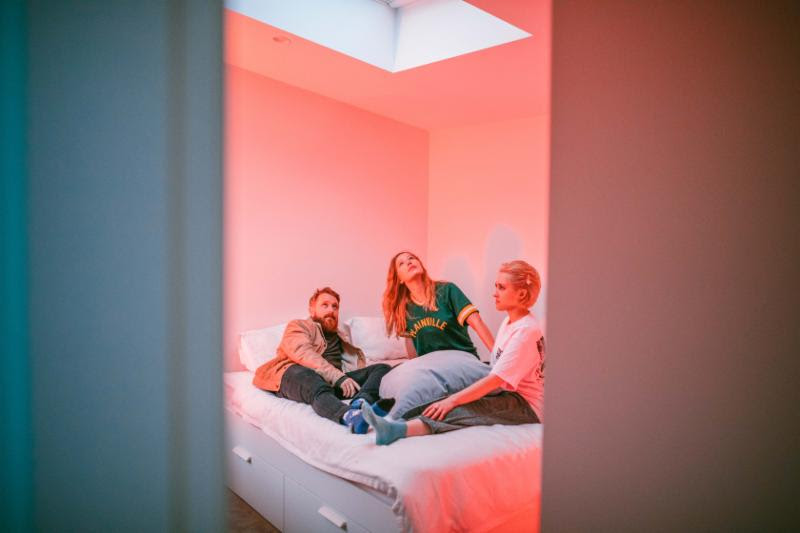 “This song is about just doing what you need to do, with no expectation of any kind of return. It’s about trusting your instincts and not seeking validation …Julia and I are performing our hearts out to absolutely no one at one …The lack of audience doesn’t dull our enthusiasm, and we know our companionship and community will be enough of a reward. It’s poignant because we grew up in the mountains, both desperate for a stage.”

Phantastic Ferniture’s spiritual home may be the garage but the band was born in a bar, on Jacklin’s 24th birthday. A group hug manifested amid the pinball machines, with all ten participants vowing to form a band. “Only four of us remembered the next day,” notes Hughes. United by fern puns and a love of leisurewear, the band met up whenever schedules would allow, writing songs and playing smatterings of dates to an increasingly devoted audience. Eventually it was decreed that this was no side project.

The brief? More spontaneous and less technical than their solo projects. “That was the fun part,” says Jacklin. “Ryan never played drums in bands, Liz had never been a lead guitarist, Tom didn’t play bass and I’d never just sung before’. Liz adds, ‘We wanted a low level of expertise, because a lot of good music comes from people whose passion exceeds their skill”.

The mission was obvious: Don’t overthink it. That’s evident in the urgent garage-pop perfection on Phantastic Ferniture’s self-titled debut album, out July 27th on Transgressive, and in the unconventional path the band has taken to releasing it.