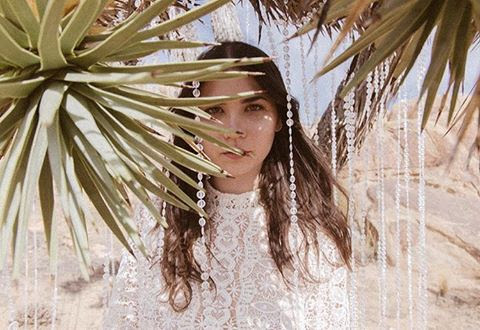 After the release of her self-titled debut EP via Burger Records and this fall’s limited edition 7″ via SuperFan 99 in the UK, Pearl Charles is back today to share a video for new song “Mind’s A Mystery.” A bonus track taken from the expanded version of her self-titled EP that Kanine will release on Record Store Day, “Mind’s A Mystery” comes just as Pearl prepares to kick off a fall West Coast tour tomorrow.

Speaking about the song and its video, Pearl said, “Mind’s A Mystery is a song about trying penetrate beyond the external facade and break down barriers in order to navigate the rabbit hole that is the inside of another’s mind and thought process. Directors Melodi Meadows & Asher Moss and I wanted to pair this song with a visual that emphasized the alluring intoxication of this pursuit and chose the desert in Joshua Tree to create our version of a mirage, a psychedelic dreamscape atmosphere that reflects both beautiful illusion as well as hazy confusion.”

At the young age of 23, Pearl Charles already has deep roots in the Los Angeles music community. Pearl started logging miles on the road with her first band, The Driftwood Singers, at age 18, followed by a lengthy stint drumming and singing in garage­-pop band The Blank Tapes. Along the way, Pearl collaborated with artists such as Jonathan Wilson, Stephen McBean (Black Mountain), Farmer Dave Scher (Beachwood Sparks) and Johnathan Rice, as well as toured extensively internationally, supporting diverse artists such as Father John Misty, Matt Costa, Thee Oh Sees, Kim Deal, The Growlers, Allah Las and Mystic Braves. Despite all of this, she managed to find time to earn a BFA in Music from CalArts.