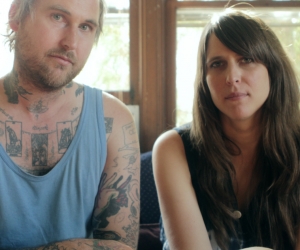 Peaking Lights have announced that Peaking Lights Sound System, Aaron’s solo DJ venture they will be playing three UK dates in September, starting off in London on September 26th before heading over the water to Amsterdam and returning to play in Liverpool and Glasgow. More information can be found below. hese dates follow last year’s Lucifer and Lucifer in Dub releases, and the remix EP Lucifer Re-Lit  which was released earlier this year.

It’s been a hectic year for Peaking Lights, balancing work and a new addition to the family. Aaron explains the set-up for the latest tour:

“So, as for the latest tour I’m rollin’ solo, cruisin’ out as the Peaking Lights Sound System bringing a bag of tricks, I guess we just found a fancy way to say DJ. Getting really excited for this! I’ll be jamming a lot of our influences and groovy tunes for you a lot of freaked out tunes. I’m not sure what to expect out there but I’ll be most likely spinning something akin to this Beats in Space session I did recently listen here: $LAYRON PEAKING LIGHTS SOUND SYSTEM pretty dancey, pretty groovy that kind of vibe…

“Looking forward to getting back to the UK and Europe, it’s short this time but Peaking Lights has had to go on tour hiatus for a while after the birth of our second son Marlon Sky Dunis Coyes”

Peaking Lights will be playing the following shows: