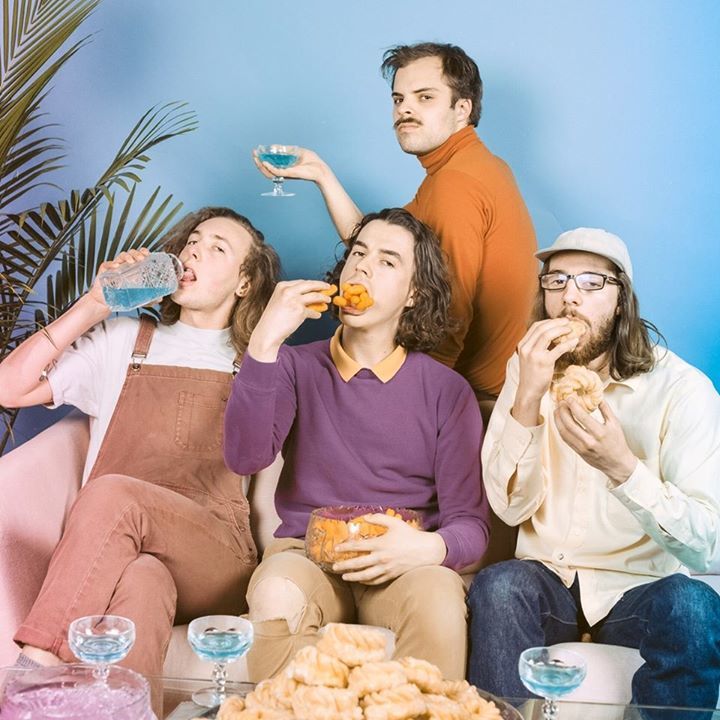 You’d think being called too normal would be a crushing blow to most artists but for Vancouver’s Peach Pit, it was a push in the right direction. After honing their craft for over a year before even playing a show, the band has quickly gained a loyal following around the world. Pushing their strange personalities to the extreme, the band’s already gained attention for their bizarre outfit choices and banter with audiences. We caught up with members Neil Smith and Chris Vanderkooy to talk about their tough-love, interesting costumes and why they call their fans “Daddies.”

Northern Transmissions: Considering you started the band three years ago, did you use your slow move towards an LP to make sure you were where you wanted to be as a band first?

Neil Smith: We did that on purpose because I’d played in a band before when I was young and we never spent much time rehearsing. So we decided we really needed to practice as much as possible until we were really good at playing songs together. So we did that for a year before we ever played any shows. We just wanted it to be that people would never say that we sucked at the beginning, we wanted to always be pretty good.

NT: Does it sometimes feel strange to be singing these songs about people that are in some cases years old?

NS: It doesn’t feel strange. It’s telling people about a time in my life when I was younger, kind of relaying different stories from when I was in high school and when I was turning 20. I connect to the songs that are newer more because they’re more close to me know. I still enjoy playing those other songs, because when we’re at a show and people are singing along to them it’s great.

NT: On this note, do you think it’s good for artists to give the kind of back stories for songs like you’ve done or did it just make the most sense for you?

NS: For me, I would like it if other song writers did that, but I like to do it because if people know what you’re talking about, it makes it more enjoyable. I’ve always admired artists who talk a lot and have a lot of stage banter for live sets because you get to know them better. You also connect with them on a whole different level than just enjoying the music.

NT: Where did the whole thing of you calling fans “Daddies” come from?

Chris Vanderkooy: That started because when I was in high school I tried to grow these horrible beards that never reached my cheeks but ran underneath my chin. At the time I thought I looked older so I got the nickname Daddy from friends, so we started saying it a lot in our friend group until everyone was calling each other that. Then we got out of high school and realized it sounded kind of creepy and stopped for a while.
NS: We brought it back because we thought it was funny, and then it really caught on, and we immediately realized “NO, what did we do?” It caught on in a weird way.

NT: Why have you decided to wear the same clothes for everything you do, and have you started to find it a bit of a hassle?

NS: We got the idea to where the outfits every single show for our EP release, and then people thought it was really funny that we all wore the same outfits from our band photo. It felt kind of strange to do at first but we realized there are so many bands that do this kind of thing. KISS even, wearing the same face makeup and outfit for every show, and you have a distinct image of them in your mind. We took that concept and watered it down a million times, and wearing something easier to do than makeup. It’s easy enough, dealing with some stinky clothes. We’re more worried about losing our clothes, especially when you have one shirt and pair of pants for each person.
CV: Today I finally did some laundry which was good because the golf shirt/sweater combo was starting to smell pretty gnarly.

NT: Considering the heavy amounts of pop all over this record, where did the darker moments of “Alrighty Aphrodite” and “Hot Knife” start from?

NS: That’s the thing with any song, I’ve written it on an acoustic guitar, so most of them start off in a darker and sadder vein. It’s bringing them to practice where Peter says “We need to rearrange this If we were able to have them be all up-tempo we probably would.

NT: I also understand you’ve taken the title of your record and your normal-side aesthetic from being called too normal at a band contest?

NS: We were in the first round of this competition and we didn’t make it through to the second round, but they passed on the critiques from the judges. One of the negative critiques we got was literally just “Being So Normal.” We thought at the time, “Man, that’s BS, what the hell.” Looking back on it, that was pretty accurate. We’ve tried to step up our live show, we started putting on outfits, so honestly I want to thank those judges for the critique because it helped us a lot, and it gave us a record title.