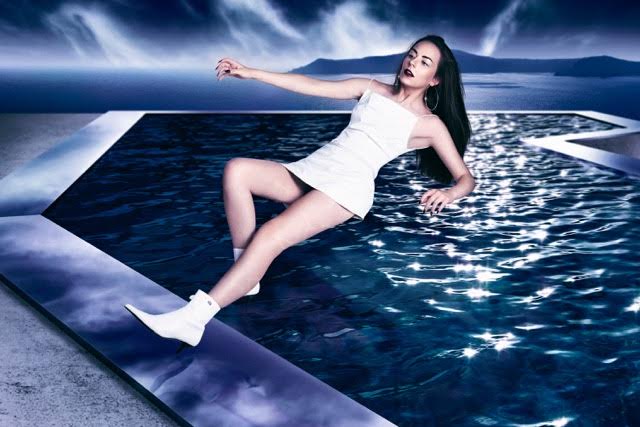 PC Music’s Hannah Diamond reintroduces herself with her new single “Fade Away”, the follow-up to “Hi”. Fade Away is available to stream and download from today, and is the first single to be lifted from Diamond’s forthcoming new EP, due later in the year. Alongside music, Diamond is known for her glossy photography and ultra-perfectionist retouching and has launched an interactive site to accompany the release featuring a series of images as part of the “Fade Away” story.

Talking about the release, Diamond says: “Fade Away is kind of about that horrible feeling you get in the bottom of your stomach when you can tell someone’s feelings for you have changed. It’s about trying to work out if it’s because of something you did or said, and worrying about not being good enough. It’s also about realising the person you are with likes the idea of you, or the idea of being in a relationship with you, more than they actually like you as a person. At the same time it’s about letting go of those horrible feelings and self doubt and moving forwards. The inspiration for the track comes from things I wrote years ago in my old diary, but also ties in with things that had been going on in my life when A. G. Cook and I were writing it. It’s a bit sad, but sometimes I feel like telling the whole world how you feel can be really empowering – it’s like deleting it, or transforming it into something fun and positive.”

Of the interactive site and editorial images, she adds: “I really wanted to take the idea of a single cover to the next level, so rather than making one image I shot an entire editorial to accompany the track. I tried to really push the images as far as I could, both technically – in terms of the compositions, post production etc and conceptually – starting to play with a sense of narrative in them. That’s an approach I’m going to carry over to the EP I’m working on at the moment, and then with the album / magazine I’m planning to release next year. I feel like the two defining elements for the site / editorial were the location and the makeup compact. The location I was projecting for the images was Santorini in Greece. It felt like a really beautiful, luxury holiday setting – a place you might go to escape your feelings, but then the introduction of the compact as the object through which all the images are viewed gets across this sense that no matter where you go you’re still trapped with yourself and with those feelings. The whole thing is really fantastical, but I like the idea of a fantasy space being a place where you can detach yourself from your daily realities and maybe discover some sort of truth about yourself that you wouldn’t otherwise.”