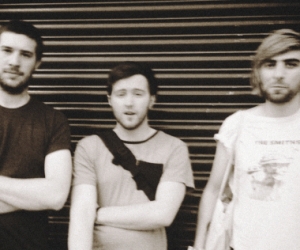 Scottish garage-rock band PAWS will embark on a brief East Coast tour in June, which includes shows with Eternal Summers, We Were Promised Jetpacks and Fucked Up. The tour will also include a headlining show at the South Street Seaport in New York, June 14. Full tour dates listed below.

$ w/ We Were Promised Jetpacks

PAWS bash out lo-fi, garage pop-rock that can quickly shift from cute melancholia to an unnerving territorial roar. On top of the pulsating fuzzy noise the three-piece produce, sit dreamy melodies that bare the bones of their author. Lyrical topics slide between sarcastic self-analysis and, onto more so than often, brutal home truths. Phil, the band’s resident lyricist sums the album’s themes;

“All of the lyrics are pretty much a documentation of the past 2 years. A lot of crazy things have happened in our lives – some good, some horrific. I’d like to say that there is a strong feeling of positivity and hope running throughout this record, light piercing through some distinctly dark times. We’re playing in this band to keep going and stay alive.”

PAWS rose out of the demise of a living room recording project, that after losing a member, was renamed and redirected into a raw nerve of DIY punk/garage that’s vibrant yet familiar and built on the traditions of English pop from Buzzcocks to Yuck. The band has spent its tenure opening for the likes of No Age, Wavves, Happy Birthday, The Babies, Harlem, Ariel Pink’s Haunted Graffiti and Black Lips and that DIY spirit pops up in the fact that they’ve done so in spaces as diverse as bathrooms, skate parks and a particularly difficult show on the top of a double-decker bus.

True to its name, Cokefloat! is, as the band puts it, “like a sugar high…with the sugar comedown.” Recorded with Rory Attwell (of Test Icicles) at Lightship95, a floating recording studio located on a boat moored at Trinity Buoy Warf in East London, the album has managed to capture the punch of the band’s live shows. Listeners can practically hear the energy vibrate out of the speakers and feel the band’s smiles radiate through the ruckus with their stories about love, insecurities, self-alienation and paranoia. Wrapped in artwork designed by comic artist and friend of the band Jessica Penfold.