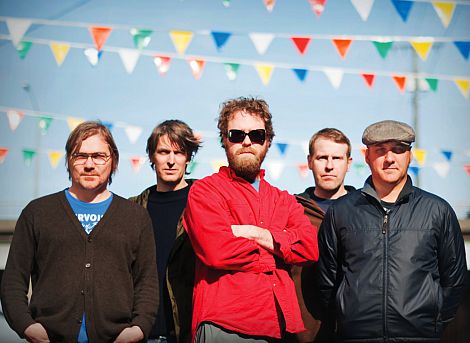 Matador Records has announced Pavement’s ‘The Secret History Vol. 1,’ the first of five compilations in a new series of the band’s rarities. The 30 tracks, 25 of which will be available on vinyl for the first time ever, include b-sides, unreleased session tracks, John Peel sessions, and a 1992 live concert from the Slanted and Enchanted era (1990-1992). The deluxe double LP contains essays by Stephen Malkmus and Spiral Stairs, plus essays from Matador Records, Billions Corporation, and Drag City bosses.

Every proper Pavement album, from the out-of-nowhere debut Slanted and Enchanted to Terror Twilight, was accompanied by a flurry of slay tracks and stray slack—songs that got scattered on B-sides, EPs, compilations, radio sessions. Some never got released at all.

Pavement made five proper album-as-albums: Slanted and Enchanted (1992), Crooked Rain, Crooked Rain (1994), Wowee Zowee (1995), Brighten The Corners (1997) and Terror Twilight (1999). What all these releases have in common, are shadow albums, otherwise known as unreleased tracks.

Matador is releasing a series of these shadow albums. The first, naturally, is The Secret History, Vol. 1, collecting the songs that got away during the era of Slanted and Enchanted, which Stephen Malkmus, Scott Kannberg and Gary Young recorded on the cheaper-than-cheap in January 1991. The Secret History, Vol. 1 collects gems from Peel Sessions (“Kentucky Cocktail,” “Circa 1762”) and seven-inches (“Baptist Blacktick”) as well as live material from the first European tours, with Mark Ibold and Bob Nastanovich in the fold. Some are outtakes from Slanted—imagine leaving these tunes off your first album, when as far as you know or imagine, it’s your only album. These tracks (some of which had never been rumored among Pavement freaks) came out on the 2002 Slanted and Enchanted: Luxe & Reduxe double CD reissue. But they’ve never been separately available as an album in their own right, and many of them have never been on vinyl before.