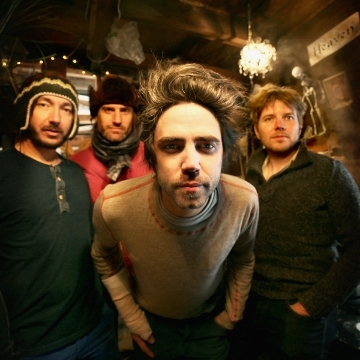 Singer/Songwriter Patrick Watson’s new video for “Good Morning Mr. Wolf” has debuted today—watch and share it below. The video stars Sophie Desmarais and Louis Négin in a surreal allegory of modern love. Directed by Chris Lavis and Maciek Szczerbowski, Oscar-nominated directors of the film Madame Tutli Putli, “Good Morning Mr. Wolf” marks the end of a year long project to create the entire visual and filmic interpretation of Watson’s latest album Love Songs for Robots from cover design to music videos and everything in between—including band photos and a virtual reality experience (Strangers with Patrick Watson, in collaboration with Felix and Paul Studios).

Watson is on tour now in support of Love Songs For Robots, including stops at Philadelphia’s Underground Arts and New York City’s Irving Plaza next week.

Watson composes, performs and records his albums with his full band of almost a decade, which includes Joe Grass (guitars), Robbie Kuster (drums/percussion) and Mishka Stein (bass). The recipient of Canada’s Polaris Music Prize in 2007. Watson and his band have performed with full orchestras in Amsterdam and Montreal. Raised and still living in Montreal, Watson himself has composed 15 scores for both film and television, including a trailer for “The Walking Dead” and Wim Wenders’ new 3D film “Everything Will Be Fine”, where he performed the songs “Cynical World” (an original for the film) and “Lighthouse.”