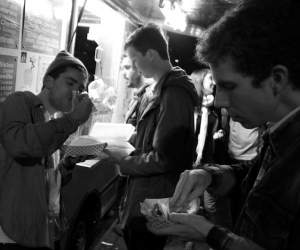 Parquet Courts’ new EP, “Tally All The Things That You Broke,” is officially out next week (Oct 14th on What’s Your Rupture?). As in, for sale in record stores, available for purchase online, gettin’ hocked at pawnshops, being pirated online, gettin’ added to mixtapes, and being played for newborn babies, ya know, to improve their ever-developing brains. Well, far be it from us to allow all the consumers to enter the marketplace uninformed. That’s why we’re sharing the entire new EP with audiences early. Today, the EP is streaming in full on Parquet Courts’ WordPress site.

Also, don’t forget that any record is, or at least should be, a righteous representation of the live band, and Parquet Courts pride themselves as a hard working one, first and foremost.The band will be playing their biggest UK dates at the end of the month. Be prepared to hear stuff off their instant classic, Light Up Gold, tracks off the new EP, and even new songs slated for the next LP.