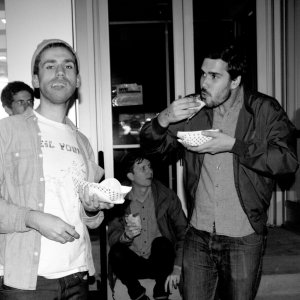 It’s been a while since Parquet Courts have shared new tunes. Aside from the brief B-side burst of “Smart Aleck Kid,” people haven’t heard new “properly recorded” songs from the boys since their album, Light Up Gold. That’s because, in between touring, they’ve been busy writing and recording more music for the nice people What’s Your Rupture?, an EP they are calling “Tally All The Things That You Broke,” which will be released October 8.

Parquet Courts have always tried to find unique ways to truly connect with fans (all while eschewing conventional means like Twitter and Facebook), whether viscerally at shows or via their wordpress site’s occasional mixtapes. Well, the band has a new mixtape, and this one’s of the brick & mortar variety. They mailed out 250 mixtape cassettes to fans and supporters, and the astute and patient ear will notice two very curious things about it. The first is the phone number overdubbed at the beginning. “NINE-ONE-SEVEN-FOUR-SEVEN-ONE-TWO-EIGHT-FIVE-FIVE, CALL NOW!” shouts a voice at the top of the tape. The second is the (not-so) secret track at the end of Side B. Well, well, well, if it ain’t a new Parquet Courts track! “You’ve Got Me Wonderin’ Now” is the first salvo off the new EP. “Tally” is far more than a stopgap in between full-lengths; it’s the sound of Parquet Courts stretching out.

“TALLY ALL THE THINGS THAT YOU BROKE” EP TRACK LISTING

1. You’ve Got Me Wonderin’ Now

3. The More It Works