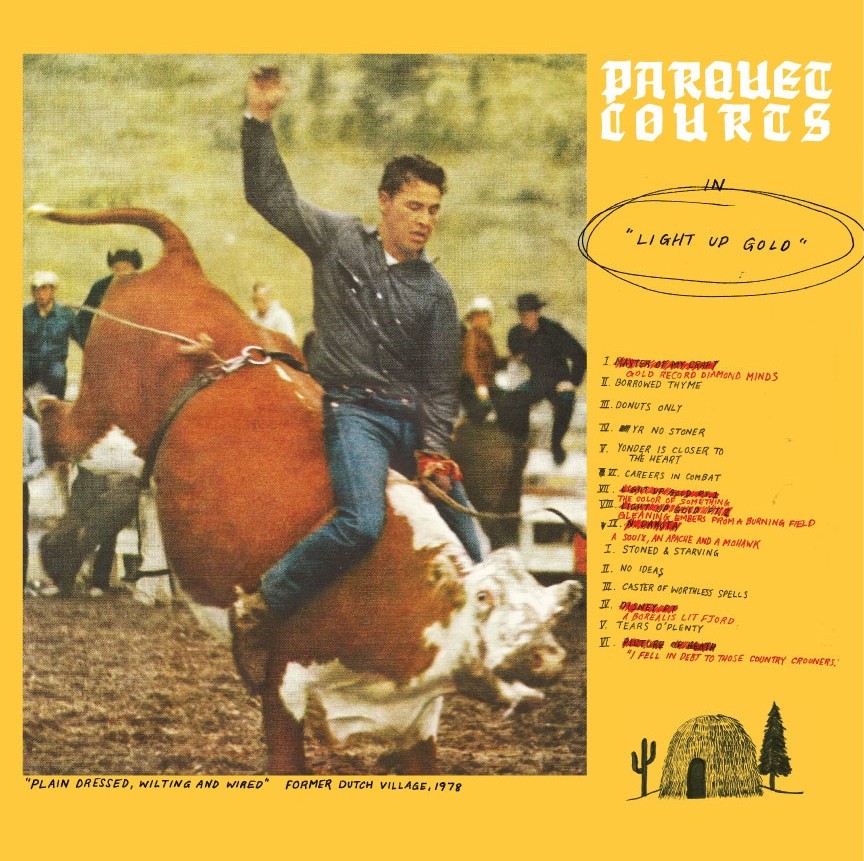 New York has spawned many bands; it’s the Holy Grail when it comes to producing gangs of dudes with guitars slung across their shoulders. Even though Parquet Courts call Texas home, NYC is their adopted residence and their searing mix of rock ‘n’ roll stomp and punk grit sounds like the seeds inside the Big Apple.

The quartet follow up their cassette only LP, American Specialties with their debut LP proper, Light Up Gold. What’s intriguing is the album contains fifteen tracks but anyone expecting a sprawling epic will be disappointed, the longest track is just over five minutes while the average song length clocks in at around two minutes. Again, anyone counting on Light Up Gold being a surging punk ‘n’ roll record will be wide of the mark, however yes, a clutch of tracks surge with the unbridled scuzz of rock and punk like ‘Borrowed Time’ and the fuzzed up police snacked themed ‘Donuts Only’. Parquet Court sound at their best when they appear pushed for time and angry with their instruments, when they play hard and fast, the Texans sound raw and untamed.

Although there is nothing wrong with pace changers on LPs but when the band drop their sonic appeal down a notch they slip into the realm of somewhere between dirge and pedestrian. Missives such as ‘N Dakota’ and ‘No Ideas’ don’t pack the same punch as the more upbeat nuggets found on Light Up Gold. This is where the fifteen tracks could be trimmed down and the slower songs siphoned off to allow for the likes of ‘Disney P.T.’ and the title track to buzz with effervescent charm. No matter what, the less impactful documents on the LP don’t dampen the overall aesthetic of Light Up Gold.

The opening ditty on the quartet’s debut is entitled ‘Master of my Craft’ and while you wouldn’t say Parquet Court have all the tricks of the trade just yet, they do carve out a damn good tune, albeit when they take their foot of the gas, Light Up Gold has the tendency to stall.