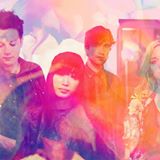 Having arrived year ago with the debut of the track ‘My Love’, on Marshall Teller’s second birthday compilation, psychgazers Parlour return with new song ‘Devil’s Eyes’, plus three additional band members and some live dates. Listen above…

The band will play a number of shows in London this Autumn, including tonight at Birthdays with Temple

Songs, and at the Dalston Victoria with Paradise and Great Ytene tomorrow:

Quietly obsessed with psych repetition, hymn melodies, pop harmonies, tape hiss and anything dreamy or noisy, Parlour started out as the solo project of Angela Won-Yin Mak, creating otherworldly pop with the use of guitars, tapes, pedals and drones. After lending vocals to Warm Brains’ ‘Zaragoza’, Angela struck up a collaboration with musician and producer Rory Attwell (Warm Brains, Test Icicles), who played drums on ‘My Love’, as well as producing and recording the track.

Now emerging with a new collection of songs and a full live band, Parlour are back, and worth getting very, very excited about. More music is set to follow in 2014, so watch this space…