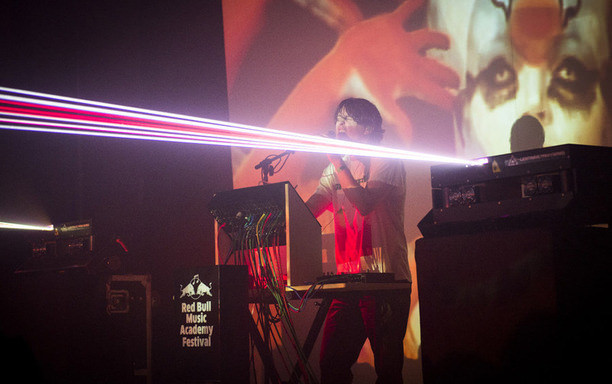 Panda Bear unraveled several slices of soaring vocals and electronics from his latest LP. Live on stage at RBMA Festival in NYC.

Instinctively nomadic and musically inquisitive, Animal Collective’s Noah Lennox first stepped out with a Panda Bear solo effort back in 1999 and since then his musical development has been as puzzling and pleasing as that of the Collective itself. Lennox made his way to University in Boston, before moving down to New York at the turn of the millennium to link up with his recently-convened Animal brethren. The range of sounds and the lack of predictability In Panda Bear’s music are certainly still there, as is the sense for glorious Beach Boys harmonies amidst loops and noises going insane and the transformations from record to record. When his 2007 effort Person Pitch made it to many year end lists, with its debt to repetitive techno structures and a clear sense of purpose within the playfulness, this marked the start of a widespread recognition that few people had dared to hope for. Never sticking with any particular sound, Panda’s range goes from the humble folk jams of Young Prayer to full-on electronic pop, while teaming up with Sonic Boom of Spacemen3 infamy has proved particularly fruitful, with plenty of experimental leanings on his Tomboy LP and Panda Bear Meets The Grim Reaper.