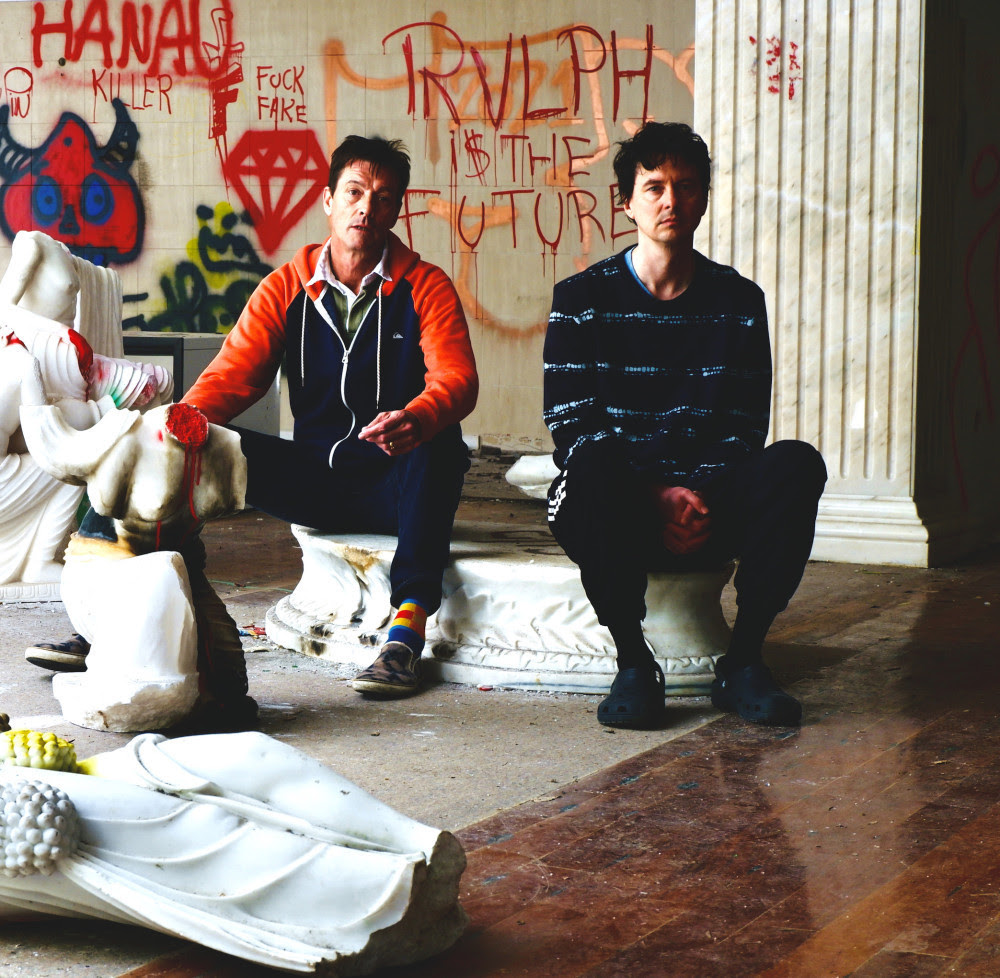 Panda Bear and Sonic Boom have announced their collaborative record Reset, will drop on August 12 (digital) and November 18 (physical) on Domino. Although the two are no strangers to each other’s music – Sonic Boom worked on Panda Bear’s records Tomboy (2011) and Panda Bear Meets the Grim Reaper (2015) – Reset marks their first joint release. Inspired by Sonic Boom’s collection of ‘50s and ‘60s American doo-wop and rock-and-roll LPs, the songs of Reset are as catchy and bright as anything either Panda Bear or Sonic Boom have made in their own vaunted career and serve as a testament to the power of communion and collaboration. Today the duo share the album’s jubilant first single “Go On,” which features a sample of the 1967 Troggs song “Give It to Me”; the song’s video was directed and animated by James Siewert.

Six years ago now, Peter Kember AKA: Sonic Boom left his home in England for Portugal, at least in part to be closer to Panda Bear. The unlikely pair met via MySpace nearly a decade before, when Panda Bear thanked Sonic Boom’s former band, Spacemen 3, in the liner notes for his solo classic, Person Pitch, prompting Sonic Boom to message him with gratitude of his own. They forged an enduring partnership, with Sonic Boom mixing and co-producing a spate of Noah Lennox AKA: Panda Bear releases since 2011’s Tomboy; they worked especially closely on 2015’s Panda Bear Meets the Grim Reaper.

Sonic Boom’s notion for Reset was simple enough: After lugging his records to Portugal, he slapped them on a turntable in a fresh space, renewing his fascination with old favorites he had not heard in years. There was the great early rock singer Eddie Cochran, for instance, or the stunning American harmonizers of The Everly Brothers. Something new struck him, too—the way the ornate intros to many of these standards felt largely like stage curtains, compelling in their own right even if they had very little to do with the hits that followed. Sonic Boom began crafting song-length loops from these preambles, twisting and bending the parts like scrap metal into chimeras. Panda Bear knew what to play and sing instantaneously and turned them into proper tunes.

Reset emerged not long after international lockdowns began, so the chance to work together on these songs offered the medicine of communion amid isolation, plus a place to funnel the blues of the present and sublimate them into something else for future use. Reset is 40 minutes of strange light, fluorescing out from a particularly dark time. That is perhaps the album’s primary promise—to reckon with the not-infrequent hardships of reality and offer some way to some other side. If making Reset supplied temporary medicine for Panda Bear and Sonic Boom, it is now permanently so for the rest of us, a reminder that sometimes playing and singing along to old favorites with friends can be enough to make the world feel a bit better.

Reset is out digitally on August 12 and on CD & LP on November 18. A $1 contribution from each CD & LP sold goes towards Earthisland.org. Earth Island Institute’s non-profit mission is to conserve, preserve, and restore the environment. A limited edition of 500 translucent pink LP is exclusively available on Bandcamp with a $10 contribution from each copy of this LP edition sold that goes to support MAPS, a non-profit research organization with the mission of developing psychedelic therapies into medical treatments to achieve mass mental health.