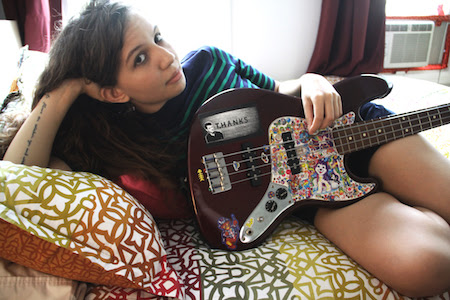 Very Fresh, the ever-evolving project of Cindy Lou Gooden, is extremely pleased to premiere the second track from her recently announced single due out this November 13th on New Professor Music. The single is the first Very Fresh release since Gooden’s long hiatus from music and it highlights the dynamic range of her songwriting talents. “Clean Touch”, with its driving grunge riffs and boldly delivered tales about keeping a clean house stands next to the slow-burning contemplative romanticism of “Pale Lips” which just premiered today courtesy of Brooklyn Vegan. Fans of Helium, Speedy Ortiz, Courtney Barnett, and Palehound should take note. Very Fresh is going to celebrate the release this Saturday at Other Side in Brooklyn, but has also taken this opportunity to announce an East Coast tour and several more hometown dates including a Girls Rock Camp Foundation fundraiser with Speedy Ortiz and Eskimeaux at Silent Barn on December 11th. See below for upcoming dates.

Cindy Lou Gooden, former professional unofficial One Direction ebook author, reluctant New Yorker, and mercenary bassist, somehow also finds the time to be the driving force behind the entity known as Very Fresh. Very Fresh began its flight of fancy at the beginning of the decade, changing form alongside Gooden’s various musical interests. It was an intimate contemplative outlet, a raucous band, and at one point, almost didn’t exist.

“I took a complete sabbatical from all music-making for about two years, from late 2012 to late 2014. I literally lost all desire to make or play music. I didn’t really know what to do with myself, so I moved back in with my parents and started an ebook business. I traveled a lot, which was cool, but musically I was dead,” recalls Gooden. “About halfway through that span, Ava Luna came down to my family farm in Mississippi to record Infinite House. They kept egging me to sing and play on it, and I just wanted none of it. Touching a guitar was a repulsive thought for those two years.”

Against her plans and better judgment, Gooden found herself back in New York in 2014. What was only supposed to be a visit turned into something a little more permanent. The old show-going routines quickly returned, and before she knew it, Gooden was playing music again. A newly found creative impetus began to take hold and Very Fresh re-emerged.

Recorded with old friends Julian Fader and Carlos Hernandez (both of Ava Luna), “Clean Touch” and “Pale Lips” couldn’t be a more apt return – old favorites finally getting released. Fader and Hernandez reprised their roles as bandmates, having once been in Very Fresh alongside a laundry list of talent that includes Sadie Dupuis (Speedy Ortiz), Jeremy Gustin (Delicate Steve, Albert Hammond Jr.), and Kunal Prakash (JEFF: The Brotherhood), among others.

The current band includes Alejandro Salazar Dyer, who also drums for Leapling (for which Gooden recently undertook a stint as touring bassist); and Ben Scherer, former guitarist in Palehound. Not one to rest however, Gooden also plays in Railings, and has sat in with Gemma, Um Are, and The Due Diligence this summer alone.

“The way I look at it now is: If I’m not making music, why the fuck am I in this impossibly expensive city with horrible weather, working a full-time job so I can simultaneously have the luxury of existing? There are so many vastly superior places to live if all you want to do is work, accumulate, and keep house. Which, despite my best attempts to convince myself that that’s all I want, is not all I want. There’s something to be said for it – but taken alone it’s a pretty empty pursuit.”