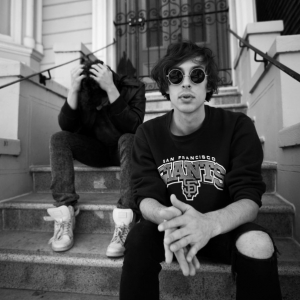 Painted Palms will release their debut full-length album Forever on January 14 via Polyvinyl Records. The album follows their 2011 EP Canopy and the Carousel 7″, released in March of this year.

Forever will be released on CD, 180-gram black LP (retail), 180-gram white LP (limited to 300 and exclusive to the Polyvinyl webstore), clear cassette, and via all digital outlets. Pre-order the album here.

Whether living four states away or four blocks away, Reese Donohue and Christopher Prudhomme have always used the Internet — at first out of necessity, later out of preference — to collaborate on their songwriting. Although the cousins grew up together in Lafayette, Louisiana, Donohue eventually moved to San Francisco, while Prudhomme stayed near New Orleans.

The newfound distance between them forced the pair to start sending song ideas back and forth via e-mail, a virtual exchange that quickly spawned Painted Palms’ first release, Canopy, which was discovered by of Montreal’s Kevin Barnes. Tours with of Montreal, Braids and STRFKR soon followed before Prudhomme moved out west to San Francisco, where Donohue still lived.

Yet, despite being in the same place for the first time in years, the duo continued writing songs apart from one another — completing individual ideas in isolation and piecing them together through the computer.

And so, the songs that would eventually form their debut full-length Forever, came together as if the musicians were still separated by 2000 miles: Donohue sending a short, looping beat and Prudhomme replying with a vocal melody before continuing to bounce the track back and forth between them until it was complete, this time focusing on creating songs with classic pop structures.

8. Hope That You See It Now