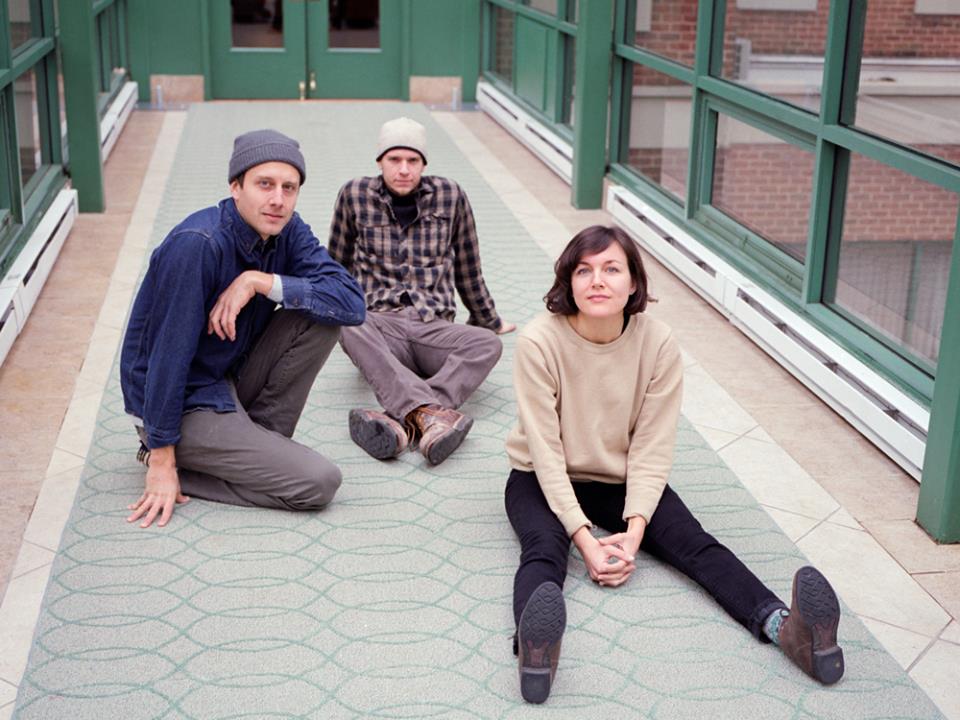 Baltimore, MD’s Outer Spaces is releasing their new album, A Shedding Snake, today with Don Giovanni Records. Their work embodies the reshaping of identity that accompanies abrupt transition, probably due to the fact that the trio relocated to Atlanta, GA midway through the process. This trio has been hard at work, additionally releasing a new video for their track, “Born Enemy,” via BrooklynVegan alongside their album.

The video for “Born Enemy” is playfully melancholic. Cara Beth Santalino spoke about the process, saying that the group “had a lot of fun working on this video and I feel like it suits the song really well. If you watch closely you can catch a cameo from our best friend and long-times muse (mews) Billy the Cat.” Referencing the fact that A Shedding Snake is an album born out of transition, the video depicts translucent shards of glass overlaying Santalino as she performs through a series of rapid scene cuts between the back seat of a moving van, and a dimly lit plastic backdrop, reminiscent of the basement scene. Santalino appears incredibly endearing as she sings about mundanity through a blue and muted worldview.

Taking cues from Pavement, the expansive melody-driven choruses are perfectly grounded by Cara Beth Santalino’s sweetly sung yet biting lyrics, highlighted by minimalistic yet powerful harmonies a la Warpaint. Her strength as a songwriter is perfectly accompanied by bandmates Rob Dowler and Chester Gwazda, who also produced the record. “I Saw You” is a lush, catchy folk-pop song that rings true to the conflict of the desire for acceptance in a new place, while not leaving aspects of your true self behind. A lyrically biting love song gone wrong, “Words,” is set to brightly strummed guitar and poetic melody. The composition of bouncing keys, layered vocal harmonies and gritty guitar on “Eternally Fifteen” are simultaneously soothing and powerful.

Like a snake sheds its skin to grow and move forward, so has Satalino as a songwriter and performer. By taking the dynamic experiences she’s had musically, and teaming with versatile and capable collaborators, Satalino has hit a stride. Influenced by Murmur-era Michael Stipe and Peter Buck, Satalino bridges the gap from what’s in her rear view to her present. “Moving to a new place is a chance for a clean slate in a way, and I think that the songs on this record reflect that feeling,” she says. “It’s a record about moving on, moving past, moving forward, and moving toward.”