Our interview with Ryan Lindsey from Broncho 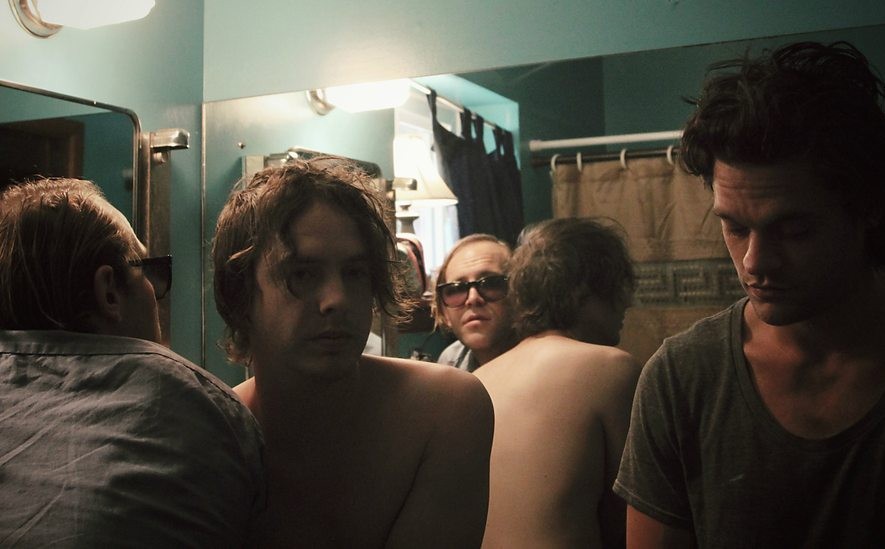 Broncho are a hard band to pigeonhole. Nearly every review/interview about these dudes on the internet feverishly tries to attach their name to someone or something, bands new or old. But when the comparisons start ranging from Jimmy Eat World to Dire Straits, perhaps that’s a sign to just take them as they are – a band that can write a shitgood pop song. The word pop has a lot of connotations nowadays but in the case of Broncho, we’re talking the sweaty basement show, all real instrument kind, from a group that seem to be unable to write a song that isn’t equally catchy as it is substantial.

Currently on tour with Billy Idol, the band’s sophomore effort Just Enough Hip to Be Women has really elevated them to a whole new realm. The fan-y posts on their Facebook wall now include love letters from profile pictures not just of dudes that look just like them, but flirty older women who caught the Billy Idol pre-show and became fans of not only their boyish good looks, but the bombardment that is their live show. Much like the show, the album is too an undeniable crowd pleaser. It’s like spitting out gum before it loses its flavour. Clocking in at just over 30 minutes,the album is a maelstrom of pleasure and ends leaving you feeling wholly satisfied – without the filler and empty aspartame-y aftertaste. We caught up with Ryan Lindsey.

NT: Obviously your track being on Girls is something that gets brought up a lot, and it’s funny I remember when that episode aired and I literally typed the lyrics into my phone and Googled them trying to find what I just heard… do you remember a moment when a song just instantly struck you in a similar way? A real “what was that??” moment?

RL: Ya, there’s.. I feel like if I can have one of those like, a year, I don’t know, it takes me out of depression. If I feel depressed, like having that moment with a song is the best. It’s a similar thing… it almost feels as good as writing a song that makes sense to you. Sometimes it makes more sense to just really get into a song. I will replay the same song on repeat, and then I’ll have my headphones in and I’m sure no one can hear me, but everyone can just hear me listening to the same song over and over.

NT: Listening to the album, they’re all the kind of songs that I can already tell will make me feel really sentimental about my youth in like five years… is this album the soundtrack to anything for you now?

RL: It reminds me definitely of a period of my life of being a kid, like my memory of being a kid. It’s not necessarily the way things were, in my memory things get distorted with time and those moments show up in dreams that always seem to take place at night… so in some ways I like to think about this record being a nighttime record.

NT: You guys have a little recording scrapbook on Youtube of little snapshots of the process at Sonic Ranch in Texas. What’s it like living and recording at the same place and what affect did it have on the album?

RL: The crew that was during that time, we were all really close anyway, we’re all each other’s closest friends, we all lived together for a certain amount of time. So, ya it was pretty smooth. We always wanted to do it for longer, like we wish we had more time. We thought up our perfect scenario of going to record for two weeks then going home for one week and then going back for a week or two, then maybe taking off for a weekend then going back for a couple days.

NT: You were a big fan of magic as a kid, read you grew up loving David Copperfield… has there been a moment with an album that gave you the same feeling as watching a good magic trick?

NT: And it played all day!

RL: Ya, I remember my family inviting people over to watch that video, it was like a Tuesday night, whatever time, we invited people over.

NT: This is really off topic, but have you heard of David Copperfield’s island?

NT: He has this island where he drew a line from Stonehenge to the Pyramids of Giza to Easter Island, and it’s in the Bahama’s and it has like a secret underground monkey village, it’s crazy!

RL: Man, I wish I knew David… I remember the rumour for a while, it was my first year of college, or my second year, my best friend’s girlfriend, they broke up… and she apparently hooked up with David Copperfield in Las Vegas.

NT: David Copperfield is a tough rebound, poor guy! You guys are touring with…

RL: Did I tell you about the time that I hooked up with David Copperfield?

NT: Whoa, wait, can you tell me about the time you hooked up with David Copperfield? How was it?

RL: It was really refreshing.

NT: You’re now touring with Billy Idol whose heyday was decades ago and is still filling several thousand person venues… do you think that can even be a reality for bands currently playing twenty years from now or has too much changed?

RL: Seems like a lot has changed and there’s such a turn over of things to get popular, but it all depends on if you can keep putting out records, I think if you can, it seems like you can sustain a certain place and that’s really hard to do. I think it’s possible but there’s not a lot of people doing that. Also, this is sort of the beginning of knowing what will happen in the future, this is a good test. Ever since things got really big online, that changed a lot of things, you can hear about stuff quicker, and so things are more thinned out, like it was really hard to get to the top, but if you were at the top you were fucking huge, now it sort of gets thinned out between all the levels. You an tour a lot for a long time in a completely different way then you could back then, but maybe it certain ways it was better back then, in terms of setting a bar level, it’s hard to say.

NT: I Read in an interview that you quit university – what’s it like to be actively doing what you’ve wanted to do as a kid, totally on your own accord, and defying that sort of standard routine of going through school to get a job you don’t want…. ignoring that monotonous process.

RL: It feels very natural. I never really thought I was necessarily going to finish. My mum says that I told her I was only going to go to college for two years, so when I told them I was quitting, she was like ‘Ya, you already told me your plan’. And so then I viewed college as an organized way of getting out of the house, you know? Ya so, once I felt like I got enough out of that then I quit.

NT: How has your album changed from when you first took it out on the road shiny and new to now, a couple months later?

RL: I think the songs make more sense after playing them live for a while. We’re in a good spot right now where the first tour was like, we went out playing these songs for the very first time but were still trying to figure out how to make sense of certain things. Before I think I realized how much we had played I got comfortable and then realized it was because we played a lot of shows. You send any band out for a month and they’ll figure it out.

NT: If you could bring three bands, dead or alive to David Copperfield’s island who would they be?

RL: Whew… this is tough. I would say Roy Orbison, Garth Brooks, no one knows show business like Garth… oh and then probably James Brown.