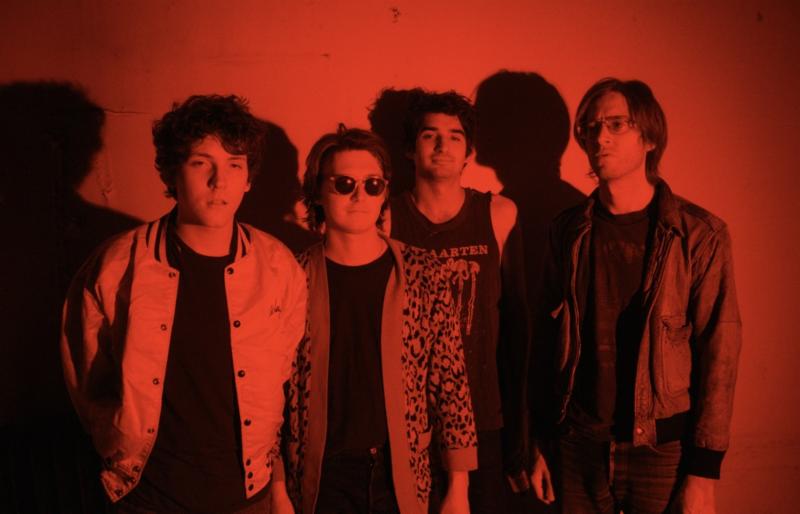 Public Access TV formed a little over a year and a half ago in New York’s East Side. Led by John Eatherly, the group amassed a large following immediately after announcing their formation. The buzz has been especially strong from the British media, with NME calling them “New York’s Hottest Band”. Since the media attention began, the band has been touring ever since, with only a one week break since January 2014. The band released their new EP, Public Access, on May 12th. We reached Eatherly in New York City on the eve of Public Access TV’s homecoming concert.

NT: How’s the tour been so far?

JE: It’s been good! We had a day off yesterday back in our hometown of New York and we have our homecoming show tonight. The guys in Palma Violets are really nice, and it kind of feels like we’re still on our last tour actually. It never really felt like there was much of a gap between them.

NT: Like Palma Violets, both bands have been really embraced by the UK, with lots of praise coming from NME. Why do you think the U.K. has such a strong embrace for bands with the style of Public Access TV and Palma Violets?

JE: I think being in a guitar band goes over a lot easier there than it does in America, like NME jumped on board with us really early on when we first started. Everything kind of feels smaller in the U.K, and they hype everything up really quickly. In that sense, their media is a lot more effective in spreading news than America’s. People there are all a lot more on the same page and like bands with guitars.

NT: Most year-and-a-half old bands don’t have the instant success that you’ve had. What’s been different compared to other bands you’ve been in?

JE: Well in previous bands I’ve been more of an accessory playing drums and never the primary songwriter. It seems like for some bands you never know what will get you more attention, it might be a song that clicks, or a music video, or it might even be a stunt of some sort. This is a different learning experience for me, now I’m trying to be the one to make the decisions and I’m more of a voice for the band rather than just being on the sidelines.

NT: Did it take a while to grow into that role?

JE: I don’t know, maybe I was somehow striving for that when I was in other bands and it feels natural. I’ve always been writing, recording, singing, and doing my own thing regardless if I was on tour with somebody else. I guess the only difference is the arrangement on stage.

NT: What was it about New York that brought you here from Tennessee? Do you think you could have made this band anywhere else in the world or did New York have an influence?

JE: I grew up in a pretty small town in Tennessee, but I loved the music of New York and its history. I just really wanted to move to a city, and I thought what better city than New York City? I was really in the middle of nowhere. Max, the bass player, and I went to high school together for a year in Tennessee, but then he graduated somewhere else and I ended up dropping out to tour. Luckily we moved to New York at the same time. I’ve known Xan (guitar) for years just through music and living in New York. The only guy I didn’t know too well at first was the drummer, Pete, but it all happened pretty naturally and quickly.

JE: I’m not a big fan of live shows recreating exactly what the recording is. I like when the recording sounds a weirder and stylistic, and the show can be a little more pre-formed. Xan is a really great guitar player, he really helped me put the stuff together, record, and write some of the bits. When he plays, he’s one of those guys that likes to play things a little different, and it’s a good thing because he keeps it interesting and exciting and it doesn’t get boring for us. When we play we don’t change it too much, but the sound of the EP we just put out sounds a little different than the current live show. It’s probably the most far from the show stylistically than any of the other music we put out before the EP.

NT: Your building on New York’s East Side burned down in March, what did that building mean to you?

JE: It was really terrible, we were on tour in California and we watched our house burn down on the computer by streaming the news. It’s just a miracle that none of us were there. It’s a tragedy, a few people died, but thankfully we’re all okay, it was just really shitty. We did everything there. We all lived there, had our recording stuff there, and it was really our headquarters for everything that we do. The whole building is just gone, it’s all crumbled.

NT: You’ve listed The Clash many times as one of your inspirations. What albums/songs of theirs have really spoken to you?

JE: The most played Clash record among us is probably Combat Rock, but Max and I get down a lot to Sandinista!. I Really like “Charlie Don’t Surf”,” Hitsville UK”, the Mick Jones songs, and Combat Rock as a whole record. I grew up really loving The Clash, and when I first got into them it was probably through their first record and I learned more as I grew older.

NT: The Clash really changed their sound and style from album to album; do you have that vision for Public Access TV?

JE: I want to keep it changing; I think it’s cool when people really change it up like David Bowie, Lou Reed, or Iggy Pop. We’ve already kind of done that a little bit. The new EP is a very drastic style compared to the first thing we put out, the Rebounder EP, which was only released exclusively through Rough Trade Records. I definitely want to keep the vibe changing from EP to record to EP to record and keep it evolving all the time, but not too crazy. I don’t want to be recreating something I’ve already done.

NT: You opened up for Weezer six months ago; have you met any big bands or celebrities where you’ve gone “I can’t believe I’m standing next to ‘so-and-so’?”

JE: With bands I liked growing up I kind of prefer not to meet them, not because I’m afraid they’ll be assholes, but I’d rather it stay mysterious. Although, if I did meet Damon Albarn I’d be really excited.