Our interview with Dan Deacon 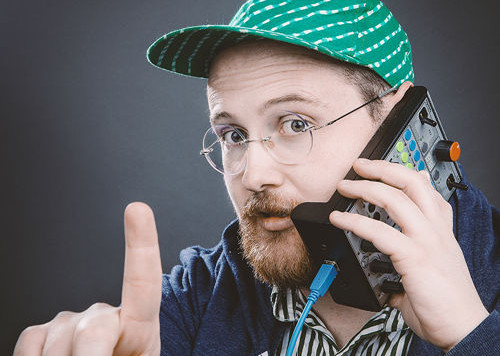 Dan Deacon and I have a lot in common. Okay no, not really, we’re just both from Long Island, New York, which is a great place to grow up, although can be very narrow in terms of carving out a name for yourself. The problem isn’t with an over-saturation of artists (which can be the issue at our neighboring Brooklyn), but more in that there isn’t a heavy interest in artists not looking to adhere to conventional guitar music. It’s happened – both Public Enemy and Mr. Twin Sister have emerged from our turf, but we’ll always be mainly known for our emo bands, like Taking Back Sunday.

Deacon however did emerge, and makes some of the weirdest and most exciting music to have ever been produced by someone from my home county. His latest record, Gliss Riffer, is a beautiful cauldron of experimental pop that fuses thorny electronics with great melodies and future nostalgia computer sounds. On our phone chat the other day, Deacon and do a little reminiscing (don’t worry, not that much reminiscing), and talk about his going back to recording alone and the anxiety that emerges when you’re essentially a decade in to be a full-time musician. We also have a little disagreement about the success rate of following trends as opposed to setting them, but it’s all good. Read on!

Dan Deacon: Hi, how are you?

Northern Transmissions: Good, how are you doing?

NT: That’s right! That is the first thing I wanted to talk to you about!

NT: So yes, I am from St. James. You are from West Babylon?

NT: Yeah, it’s rare when I can interview someone from Long Island, mainly because I feel like a lot of musicians from there don’t really move into anything quite as interesting as the music you make, save for a few exceptions. Did you make music in high school?

DD: I did. I think that’s where I really started falling in love with writing music. I found a computer program called Gritty Soft. Which was like MS Paint, where you could take clips, and notes into it, and assign instruments as opposed to colors and brushes. I all of a sudden discovered this software and it changed how I structured my life. My free time became about that. Even when I was in bands, I was writing the parts on this software, and my band members were like, “This is impossible.” And I just really loved that idea.

NT: On America, there was a conceptual drive to the set of songs. Would you say Gliss Riffer has a concept in a similar way?

DD: Well, similarly with America, the theme emerged when the record was almost done. I didn’t sit down and be like, “I’m going to make a record about this!” I didn’t have a narrative arc in mind, it just sort of emerged, and I think that was the same with this record. I think with this, it was more about trying to figure out why I was constantly stressed out or have anxiety.

NT: Do you feel you always had a level of anxiety, or did that emerge over time?

DD: That’s what I kept wondering. I was like, “Did I have this?” It’s impossible when you do feel anxious to really see the past clearly. It’s like, “Was it always like this? It’s this just what it’s like now?” I don’t know, and I was applying stress to everything I liked, and I didn’t understand why. I think this record was like a working through that and I feel a lot better about it.

NT: Do you feel like it emerges because you suddenly have a career path that is based on being a full-time musician?

DD: Well, there’s consequences for the first time, for something that used to be for pure pleasure. You do think about it differently, it’s impossible to not. It becomes your job and your livelihood.

NT: Did it feel weird going from a record with musicians to doing it pretty much all solo again? Did that contribute to the pressure?

DD: I tend to not do things twice, I’ve realized. As much as I try to always find a system and stick to it, I’m constantly augmenting it. I made Spiderman [of the Rings] by myself, and I didn’t really know what I was doing, and it was all inside the computer. I didn’t think anyone would ever hear it. And Bromst, I was beginning to dive into how I would work with acoustic instruments, and it was largely percussion, and a little bit of winds, but that was basically it. And on America, there was a large expansion upon that idea. And with Gliss Riffer, I wanted to make an electronic record, but in the process that I made America, with space. I wanted to approach this record with that in mind and think about the delicacy of each sound. So it was a weird process and weird to be the only person in the room, but it was also fun and challenging.

NT: I wanted to talk about “When I Was Done Dying,” which has no chorus but has a lot of words and has this long, unfolding quality to it. Where does a song like that start?

DD: I wrote that one on a train coming back from New York. I was doing a show with the Kronos Quartet, and I was thinking about the strings, and harmonics. So I chopped up some string sounds and made that loop. I had lyrics in mind, but I was really getting infatuated with the lyrics of Joanna Newsom, and Bob Dylan. I kept thinking of a folk music tradition; of story telling through music. I have very few songs like that.

NT: On “Taking It to the Max,” the sound of everything on the track sounds like it’s coming from old ‘90s computer programs. Can you tell me how that song came together?

DD: Well, the opening is for a prepared player piano. It was two player pianos on top each other. It’s recorded it in different keys but at a ratio tempo, so when I’d put it at proper tempo, it would sound like a much larger piano and smaller piano, it would give it that percussive sound. I had a player piano so I thought, “Let me try it out.” I used those grey artist erasers right at the tuning peg, so it was like palm muting. I started the song a long time ago, and it kind of just sat in the pile, and never really thought of how to finish or develop it. But when I did Moog Fest in 2014, I was down there and did a demo for them in their studio. It all started coming together and I was making tracks that would go well with synths, and I wasn’t really sure if it would make the record or not. But then when we were down there, the song started becoming a finished piece. The last thing I added was the vocal chops. I wanted [the piece] to last for hours and hours, but I’m always thinking about the process of pressing the vinyl when I’m recording, so I knew it had to have an ending. But the benefit of music is that it can have multiple forms. I could put out a 90’day version digitally and play and hour-long version live, but I figured this version would make most sense for the record.

NT: Overall, this is a very psychedelic-sounding record, in an era where I feel like that isn’t quite as common. Do you feel like interest in psychedelia goes in phases?

DD: Well, everything goes in phases.

NT: Do you feel conscious of that sort of stuff?

DD: [Laughs] I just try to pay attention to what I like. I don’t think there’s anything wrong with people following fashion, but it’s just not what I do. My music is largely like a wave of odd, personal self-expression. I think if I worried about what was popular or fashionable I would never be doing what I was doing in the first place. When I first started I was making music that wasn’t that, and it just fell into the right place at the right time. I kind of fell like a small restaurant, and I’m allowed to change my menu as much as I want. I feel really happy being where I am. That’s why I find They Might Be Giants to be such a big influence, because when they started, they were such a weird band in the middle of things. I would say it stayed there, and I’d like to stay there as long as possible. When you know you’re not going to be weird enough to be in the true avant garde, but you’re too weird for the pop music world, you can experiment so much more freely. On the other hand, David Bowie is such a huge influence, and was someone who followed fashion and trends, like someone hunting something. I don’t feel that way. I wouldn’t be able to do it if I tried.

DD: I don’t know, I think lot of people do! That are just good at navigating trends. And not that anything’s wrong with that….I like the term, “old-fashioned,” and “out of style.” Most people like old music and vintage clothes, and I don’t know what point I’m trying to make…I can’t finalize this thought….

NT: Well, I mean what I guess I’m saying here is, yes, there are artists that hop on bandwagons, but there always has to be people who make the first move, and I feel like those are the successful ones.

DD: I think a lot of the most successful music — I think of it like land. Like making farm land. There’s always a group of people that are selling the trees, and going through the forest and making a clear land. And someone’s going to kill that land and turn it into farm. [It’s] recycled. It’s never like the person who knocks down the trees. It’s part of the system of anything. It’s very apparent in music and music has this very rapid cycle.

NT: I totally see what you mean, and it’s a valid argument against mine, certainly. One last thing, pulling it away from a philosophical analysis of pop music…

NT: …What’s it going to be like playing this new stuff live? Do you have a band set up? How has it been like converting it to live performance?

DD: Well, we just started the process now. I’m not going to do the whole tour with a band. I think most of the show will be solo, and a portion will have live musicians. I always wait to the last minute which is why we’re doing it now. When you hear something repeated exactly the same way every single time, which is what happens with computer music, when it changes in any way, it’s always jarring, so it’ll take a while for me to get used to. I’m really confident, I think it’s going to be really cool.