Our interview with Australia’s Middle Kids 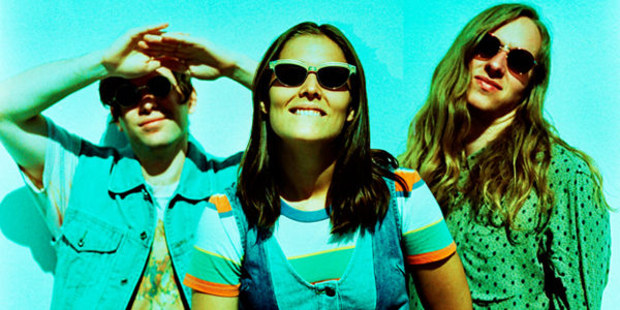 Middle Kids are a Sydney, Australia band comprised of singer Hannah Joy, guitar player Tim Fritz and drummer Harry Day. The band formed and began playing under the Middle Kids name in early 2016. Their debut single was Edge Of Town, and prior to its release the trio hadn’t even played a show. As luck would have it, that single caught fire. Edge Of Town received huge airplay on Australia’s Triple J Radio, and Australia as well as abroad began to take note. Elton John dropped the track on his own personal playlist, the band won an award to play Iceland’s Airwaves music festival, and major indie label Domino signed the band on without so much as an EP to their name. The band appeared on the late night talk show Conan earlier this month, and later this month begin their first American tour supporting Cold War Kids. Just as I was preparing to interview the trio, it was announced that Middle Kids will also support heavy weight Ryan Adams on his Australian tour dates this spring. With their debut full length dropping in the later half of this year, Middle Kids are clearly a band to watch for 2017. I caught up with Hannah, Tim and Harry as they were relaxing in Los Angeles before embarking on their tour.

NT: You guys have all played music for a while, solo and in bands, but Middle Kids is a pretty new entity…but you’re now on every ‘must watch list’ out there. When did the band officially come to be? How was initial reception?

MK: We got together and began playing under the name around the beginning of 2016. It was cool because when we first released ‘Edge Of Town’ we’d never played a show, I think the song…people seemed to like, but we didn’t have a wide reach at all. We played our first show in July of last year and I think we started feeling like making music in the format and combination was a really good vibe with each other and then also just how the music was being received seemed good. But a lot of industry happy things can make it seem like this is further along than it is, and we’re going on tour because we want to play for actual people and meet people and have them hear the music. You cant really skip that. We definitely consider ourselves a young band and a small band. Its nice to have the publicity but that’s why we’re here, to go and actually play some shows.

NT: You mention not even having played a show when Edge Of Town was released, and it was really that song that kicked off the hype and buzz around you guys. Did you guys have any idea when you wrote that song and started playing it that you had penned a game changer?

MK: No, we didn’t. We loved it…it was the best thing we had made together, but we had no idea that it would move the way it did. But I think we really loved the sound that we were making with that song, the guitar sound, that emotional indie rock vibe and exploring that has been exciting.

NT: How excited are you to get the full album out so people can start talking about other songs?

MK: Yeah I think thats obviously our biggest focus this year, we’re all really excited about that because there’s nothing like having a full length record to actually say something. I think until then we’ll still feel like there is this anticipation, even amongst us, you know. We love the EP and enjoy playing that music, and feel like that’s still young and super fresh but we’re really excited to release our first record. You only get to do that once, it will be really cool.

NT: Is there more pressure now on the full length, given how well the singles have been received and the press and hype around you guys, signed to a major label, etc?

MK: I think its created a really positive energy in many ways, I think creating the EP was a great way to get started and helped to kind of pool together a body that was more succinct than an album. I mean we want to deliver something good, and better now, but we feel a really great momentum to make something that we feel really excited about.

NT: Is it hard to keep track of gaining so much press and hype so fast, appearing on Conan, Elton John plays your song, you’re on all the must watch lists and yet (at the time of the interview) your EP isn’t even released yet. Is it hard to keep focused and not get too far ahead of yourselves?

MK: Yeah I think we’re just focused on playing good shows, and meeting wonderful people and expressing ourselves and what we think is true and beautiful, so that’s what’s helpful – is just really keeping the focus on the band.

NT: Have you thought or come to grips with music now looking like potentially it could become a career for you guys and not just a passion, whereas maybe a year ago that might not have been the case, have you had that sort of internal conversation yet?

MK: Yeah, it weighs pretty heavily on our minds at the moment because we’re kind of at that point now where if we want that to happen we’ve got to actually go all in. This year will be the biggest year for us in that regard, you know, we’ve all been working part time for the last couple of years as we’ve worked on music but this year…yeah, its getting real, having to quit jobs and sort of put ourselves out there and try and do it. Its super exciting.

NT: It seems like the last few years there are more and more bands coming out of Australia and making a splash overseas – does it seem like that to you, like Australia is kind of having a musical renaissance or have they always been there?

MK: I think there are just a lot of really good artists in Australia, there’s just a bunch of high quality acts all the time in Australia, so its nice that they can get a look from the international markets more recently. I don’t know that there has been more of a push lately or a renaissance I think they’ve always been there.

NT: What are three Australian bands that we don’t know about yet that you think we should look out for?

MK: Ohh, thats a good question. You might not know about Julia Jacklin, she’s really cool. She’s got a US label and she’s sort of becoming known. She just put our her first album a few months ago and its really great. There’s a cool band called Good Boy, they’re a punk band, they’re really fun and um maybe King Gizzard And The Lizard Wizard. We saw them a festival a little while ago and they were by far the highlight.

NT: Thanks for your time guys and enjoy the tour!