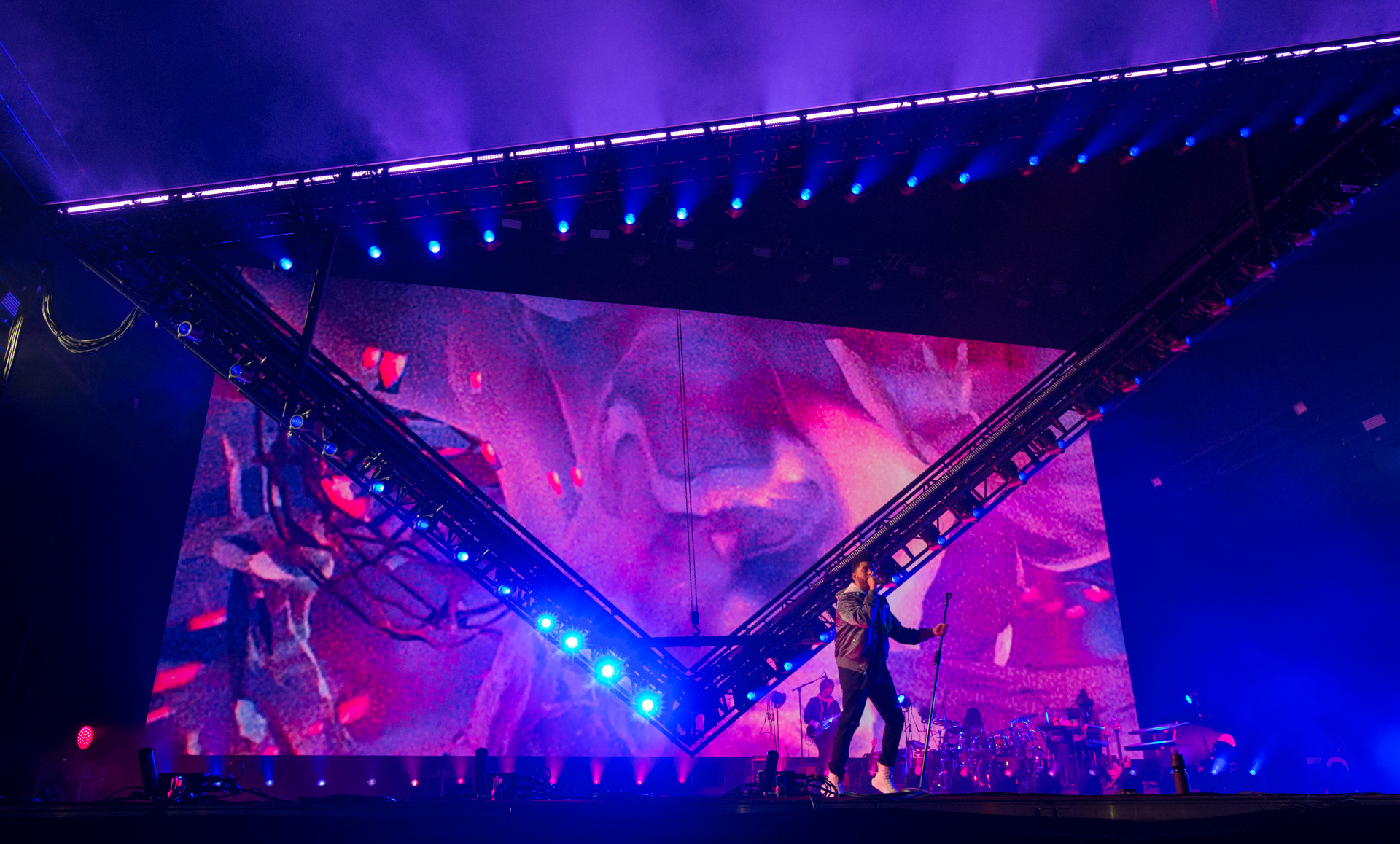 The Weeknd by Pat Beaudry, Virgin River Stage,
Share on TwitterShare on PinterestShare on PocketShare on RedditShare on FacebookShare on Email

With the sun in full effect, the final day of Osheaga was an uninterrupted blast, featuring artists of all genres and sizes, bringing the festival to a close with memorable shows.

Stomping around the stage with seismic energy, Bishop Briggs has clearly evolved from her days as a club performer. Raising the crowd through tracks like “Wild Horses,” she weaved and bobbed around the stage, commanding the crowds attention as she made her set much larger than her small band. Commanding claps and harmonies from the crowd on tracks like “The Way I Do” and “Dark Side” she was constantly driving energy from the crowd, stirring up a lot of the eager fans looking for the best show at the start of the day. Wooing the crowd with “River” she brought the energy to a peak, finishing the set on her loudest banger with an extra round of jumping after the final chorus.

Drum set front and centre, Whitney brought their delightful indie tones to the Valley Stage. Hitting the crowd with the smile-inducing vocals and guitar fills of “No Matter Where We Go” early on, they had the crowd begging for more. Bringing the downbeat mood of “Follow” and debuting new material as well, they kept the crowd swaying in the afternoon breeze as Julien occasionally took swigs of wine from up on his drum podium. Hitting the high emotion of “Golden Days,” the band delivered their creamy, lo-fi rock as the crowd sang along to every word. Closing on “No Woman” the trumpets rang out into the open sky and the crowd chanted every little vocable and note out as the band gave an extended outro to their perfect Sunday afternoon setlist.

Taking no prisoners in their brief set, The Lemon Twigs were a constantly shifting force as the D’Addario twins constantly shifted between guitars, drums and keys. Playing tracks like “I Wanna Prove To You” the synergy withing the band seemed completely unaffected by their constant live antics. Lending more aggressive attitude to tracks like “Baby, Baby” there were kicks flying all over the stage, and even a brief reference to a bad review their record got after an eight year production. Quickly shuffling Foxygen’s Jonathan Rado on stage to thank him for producing their record (along with Whitney’s for that matter), he made a quick joke about their review before letting them go on. Closing on “As Long As We’re Together” they brought the crowd in for a final cry and flail around the stage, bending every which way with their guitars in hand.

Opening on a light medley of their most iconic tones, Foxygen had their band in full swing as Sam France took the stage to start singing. Ripping through a brash and improv-heavy take on “We Are The 21st Century Ambassadors of Peace & Magic,” they were going big with the show, letting their brass and extra keys fill the sound. Easing the crowd’s need for the hits, they immediately jumped into “San Francisco” as the crowd sung their hearts out. Bringing out “Shuggie” the crowd grooved to the track’s trippy timing, and went into a full mosh as the song hit its fast bits. With France and a backup singer doing an unbelievably fast outfit change, they launched into a full play of their new record Hang as tracks like “Follow The Leader” and “Avalon” proved the most chant ready. While the second half of the album did drag in the set a little, the instrumental bombast on tracks like “America” and “Mrs. Adams” was a joy to catch from their live band. Closing with “No Destruction” and “On Blue Mountain” they riled the crowd up again for a jumping and screaming finale. While it was really interesting to catch all of their new record in one shot, it felt a little wrong to ignore tracks from their 1st and 3rd records.

Not ones for subtlety, Die Antwoord took the stage from their LCD mountain, as they moved along with dancers around the massive structure. Blasting the grounds with their heavy tracks like “Fatty Boom Boom” it was easy to get caught up in the frenzy as their in-your-face dance-rap clearly worked best live. Going through “Daddy” and “Banana Brain” they kept the crowd flipping around, as their weird art (phallic in constantly surprising ways) took any attention left from the crowd. Taking the set to its last possible end, “I Fink U Freeky” turned the crowd into a frantic ball of movement as both the band and fans were clearly losing their minds.

Closing the night and the festival on a high note, The Weeknd started his set on a light-heavy intro, blasting through “Starboy” while pyrotechnics fired off around him. Blasting through his older deep-cuts, his angular lighting rig set a powerful, evolving visual to accompany the awesome back-catalog trekking. Playing “In The Night” he kicked the crowd back up, showing off his dance moves as he got the crowd to do the same. After a bit more side-material like “All I Know” he brought the heavy hitters as he screamed the crowd through “Can’t Feel My Face” as he brought his moves once again. Bringing out “I Feel It Coming” he lifted the whole energy of the show into light disco, truly transcending the show into as he called it “The biggest party in Quebec tonight.” Closing out the track with a bang, he hit his final chorus as fireworks flew out from the top of the stage, leaving his set and the festival with one last memorable moment.