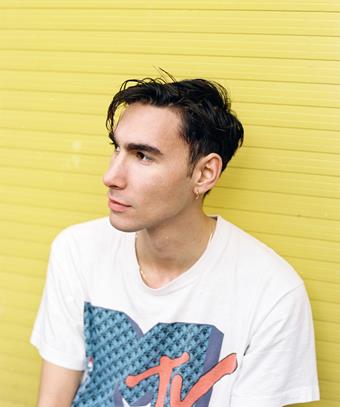 In the 6ft 2” form of 23-years-old Oscar Scheller, a melody-savant has emerged from his messy bedroom in North West London holding a MacBook full of songs. Today, you can listen to one of those songs “Beautiful Words.” Oscar will start his tour on May 12th in London, including a few stops along the way, with Madrid band Hinds (originaly Deers).

Oscar studied sculpture at St Martin’s College. His mum kicked it with Ari Up at The Mudd Club. His Dad was in New Wavers The Regents, then produced acid house. Songbook classicism pours out of Oscar in a rich baritone. It’s how he deals with loss, painful things, family things or girls.

But the English guitar canon, and the love of Bobby Sox fan-winning crooners, like Ricky Nelson and Buddy Holly, isn’t the only thing going on here. He picked up the piano as a baby and learnt Erik Satie. At art school his sculpture was all about mix-media collage – as well as college humor. He pasted his own bathetic Biro-written notes onto Ruben’s ‘Judgment of Paris’ and things like that.

In the same way, his melancholic songs make heavy use of snippets of sampled breakbeats, naughtily broken off from 90’s East Coast rap records (he also loves rap). It’s like he fell asleep listening to ‘Parklife’-era Blur, followed by Nas’s ‘Illmatic’, and woke up with a gangsta melancholy synthesis boogie. ‘Beautiful Words’ even has a ‘Dem Bow’ beat swathed in Oscar’s fuzzy, scrunchy bedroom production (he takes his cues from other favorites here; The Radio Dept.)

The Beautiful Words EP will be released digitally and on 12” vinyl.

The North American release will also include “Daffodil Days” and “Caramel Brown” which were recently released on the Daffodil Days 7” in Europe.