“Omnion” by Hercules and Love Affair 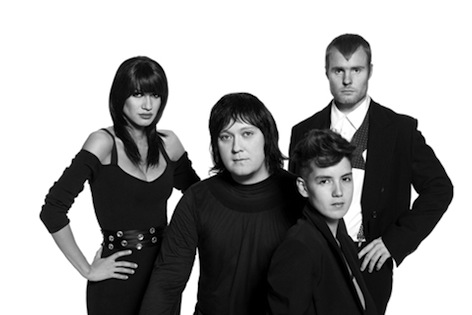 Available for streaming and downloading now, “Omnion” features vocals from New York singer-songwriter Sharon Van Etten and is, according to Hercules front man Andy Butler, an ode to “a childlike dialogue with a higher entity voiced through the filter of a broken adult male.” The pair met when Butler remixed Van Etten’s ‘Not Myself,’ her heart wrenching response to the Orlando Pulse Club massacre.

Says Butler, “I feel so blessed to have had Sharon Van Etten sing ‘Omnion.’ She is an artist of incredible depth and authenticity and her voice is so inviting yet truly has a mystery about it. Those qualities rendered a beautiful interpretation of a song that is ultimately an appeal to the divine for help and healing. With such a generous spirit and kindness about her, she was a joy to work with.”

Omnion’s credo – a message of faith and tolerance as a response to our troubling times – was one that resonated strongly with Van Etten: “This song is so vulnerable, but strong. Coming to terms with identity and finding community… It’s a very important time to share in that sentiment. I really appreciate Andy reaching out to collaborate. His heart beats in his songs.”

“Sometimes songs are born out of an intense moment that has nothing to do with club music,” explains Butler, “I’m not just a ‘head’ (read techno-head, house-head, disco-head)….I’ve always been just as touched by, say, Sinead O’Connor accompanied only by a guitar, singing an intensely spirited message.”

“A few years back,” Butler explains, “I was in the grip of a brutal drug addiction that saw me overdosed in hospital every weekend. I was really decimated.” After having had “a massive, massive relationship” with drugs and clubs since his youth, ButIer has now been clean for four years and “Omnion” is rich with his re-immersion in the wider world, in all its ugliness and beauty.

Raised in Denver, Colorado where he cut his teeth as a teenage DJ, Butler escaped to New York, and forged Hercules & Love Affair as an outlet for his songs. From the retro-futurist Paradise Garage grooves of an eponymous 2008 debut (with longtime friend ANOHNI on the classic, “Blind”), through the thoughtful elegiac songwriting of 2011’s Blue Songs, to the bumping, grittier pulse of 2014’s The Feast of the Broken Heart, Butler has again nailed a body of work that bridges the dance floor with those listening at home. Omnion moves his game up a notch, and reflects his current “hypersensitivity to things going on… personally and in the world.”

Of this consciousness, Butler explains, “Sometimes the dance floor represents a decision to avoid dialogue with the wider world, to commune with people but not really talk. But, humans need to challenge themselves and step it up.” He continues, “Not that everything has to be so serious, but this Hercules record is.”