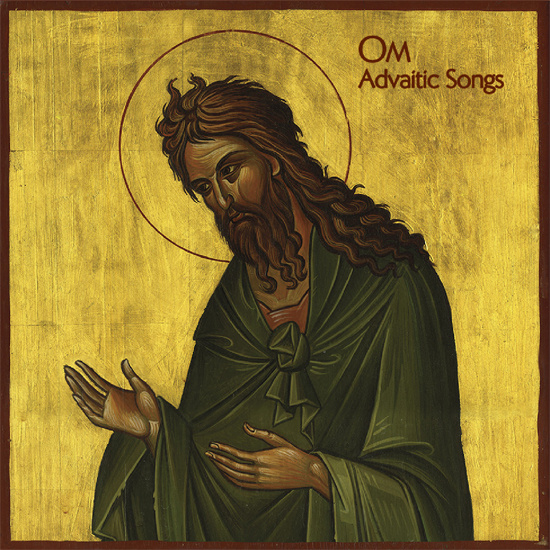 Om is a mystical sound of Sanskrit origin, sacred and important in various Dharmic religions such as Hinduism, Buddhism, and Jainism. Om also refers to the two piece Psych Rock band from California which draws on many themes of the Sanskrit word. Front man Al Cisneros has evolved the band’s sound from his days with doom metal band Sleep. With three albums to their name and a handful of singles and EPs, it’s safe to say that the sound has evolved enough to the point where you might not even use the words stoner, doom, or metal to describe the latest album Advaitic Songs. I would probably use the term Heavy Spiritual Rock, although the word spiritual here is referring to a myriad of imagery ranging from Hinduism, Islam, and Judaism. It’s a sound based off of melodic bass lines, heavy drum beats, and soothing cello swoons, but primarily this album is centred on the concepts of spiritual exploration. It’s a theme that is well thought out and executed successfully to allow even the most atheist of listeners to take notice and enjoy.

At 5 songs it still is there most of any album they’ve released to date, even if you take into account the first song “Addis”, which is more of a chanting hymn than a proper rock song. “State of Non Return” is the second track which picks up the pace considerably and is by far the heaviest song. In Buddhism an Anagami, which means non-returning, is someone that does not return to the Earth but stays in heaven where they will eventually achieve full enlightenment. It roots the album down musically in a very heavy tone that it does return to in theme, but never fully repeats. The next track “Gethsemane”, the Christian pilgrimage site, is an 11 minute opus that is the peak of the album with its punishing bass lines but serene focus that the basis for most stoner rock. As the 4th track “Sinai” hits we hear more cello and melodic passages that evolves off the tempo from “Gethsemane”. “Haqq Al-Yaqqin” the final track on the album primarily focuses on the cello melody, which is really the only disappointment in the album, mainly because you really want the songs to return to the heavy rhythm that was set up in “State of Non Return”. Perhaps Cisneros felt that he had to go all in when conceiving this concept album. It can be a dangerous path if you stray too far from your roots, but luckily the album stays afloat in its sacred divination theme.

There is a correlation between stoner rock and spirituality, it’s perhaps a line that can only be ventured upon when it’s done with earnest intentions. Cisneros has approached his concept album with full sincerity and that is something to be commended because there are so many stoner rock bands that will try to delve into spirituality and mysticism and it ends up coming off as being shallow. Maybe it’s a sign of my old age, or maybe it’s just a sign of maturity that you demand something more visceral from your art. Om’s Advaitic Songs certainly gives us that.