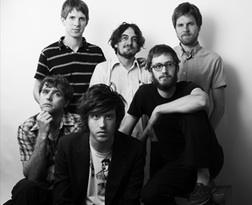 Okkervil River have just released a new video previewing the packaging of The Silver Gymnasium, which comes with a central gatefold map drawn by William Schaff, depicting Will Sheff’s childhood town of Meriden, NH, circa 1986, where his parents worked as teachers for a boarding school. The video intertwines images from the map with mid-1980s photographs of Will as a child. Check out the video featuring an instrumental version of new track “Lido Pier Suicide Car” above:

Sheff conceived the album as a tribute to the spirit of pre-adolescence, meant to evoke the nostalgic feeling of, in his words “an action figure you found in the woods.”  The map is designed to look like one drawn from a child’s vision, and the printed version has a legend with numbers correlating specific places to each song on the album.

Although he has long been known as a character-driven songwriter, Okkervill River’s Will Sheff announced that this album is a work of autobiography.

The Silver Gymnasium is set in a very specific time and place from Sheff’s childhood – in 1986 in the small town of Meriden, NH, where Sheff’s parents worked as teachers for a boarding school. Sheff conceived the album as a tribute to the spirit of pre-adolescence, meant to evoke the nostalgic feeling of “an action figure you found in the woods.”

Sheff wrote:
“On our last record, ‘I Am Very Far,’ I was musically trying to both satisfy and to challenge myself; for ‘The Silver Gymnasium,’ I wanted to write a record that was very much about trying to reach out to other people and show them a good time. I’d always wanted to write a record that was more based in autobiography, that spoke about my memories of how I felt and how the world around me seemed at a specific moment in the past, and it felt like a good time to finally do it. I thought John Agnello would be the perfect choice as a producer, not only because I’ve enjoyed his more recent records with people like Kurt Vile and Dinosaur Jr. but also because John is a much more old-fashioned producer who was actually involved with a lot of the music I listened to growing up, everything from Cyndi Lauper to John Mellencamp to the Outfield’s “Your Love.” John even worked on ‘Born in the U.S.A.’ and was loitering around in the background during the making of Tom Petty’s ‘Damn the Torpedoes’; so he was actually present while they were making a lot of the music that inspired the kid version of me to want to be a musician and that inspired ‘The Silver Gymnasium’ in general. Our goal with ‘The Silver Gymnasium’ was to work quickly and decisively, to make a “band” record and not a fussy studio creation, and to make the most fun record we could possibly make.”