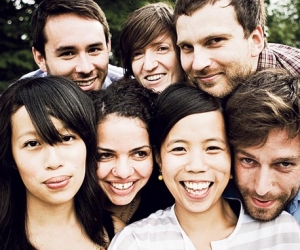 Canadian indie group Ohbijou have announced that they will be going on an indefinite hiatus. They will perform a farewell show in Toronto on September 7th at The Great Hall. Joined by fellow musicians from The Acorn, The Wooden Sky, The Rural Alberta Advantage, Snowblink and many more to be announced – the evening will celebrate the incredible accomplishments the group has experienced since their conception in 2006.  Ohbijou’s, Casey Mecija, her sister Jenny Mecija, James Bunton, Ryan Carley, Anissa Hart and Heather Kirby, will gather together on The Great Hall stage to perform a selection of songs from their three studio albums (Swift Feet For Troubling Times (2007), Beacons (2009) and Metal Meets (2011)). Full details about the event can be found here. The band released a video statement for their fans and supporters, which you can watch above.

Statement from the band:

“Ohbijou has chosen to go on an “indefinite hiatus”. For the past 8 years we have shared experiences of music and friendship that extend beyond any dream imaginable. We are sad to close this chapter of our lives, primarily because our time together as a band was also often marked by an unbridled sense of hope and possibility. In the beginning, our youthfulness buffered the long hours spent traveling in small vans to play late hour sets; our surety that being in a band would make us young forever cushioned the harshness of being paid in beer and press. In the beginning, we turned down commercial offers sure that they compromised our potential to create change, through art, in our local communities. In this, we feel successful.

Unfortunately, it is time to take pause and allow for new experiences. However, we do not leave without feelings of swelling gratitude. We are thankful for the media who have paid us respect and for the collective of musicians and artists who we surround ourselves with. We are forever inspired by our travels to places we never thought we would visit. From Thunder Bay, Ontario to Arabaki, Japan we have met so many people who have impacted us. We are thankful for the promoters and venues who have welcomed us on their stages and to everyone we have worked with and who helped us along the way. Thank you to Steven Himmelfarb, Beth Cavanagh and Indoor Recess, to our record labels and to Remi Arora for his continued support. Thank you to our friends, families and partners who have patiently showed love and support through this adventure. Lastly, we are grateful to those who have listened to our music, attended a concert and made space for us in their lives. Thank you.” – Casey Mecija