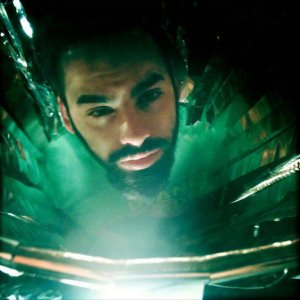 Toronto’s Odonis Odonis are set to release their latest single “Are We Friends.” The song, already a staple of their live shows, is a continuation of the blistering fury let loose on the public earlier this year in the form of the Better EP. Though they’re known for sinuous surf riffs, those tides are tamed for now, exposing the band at their most elemental: insistent industrial rhythms and noise. The song begins calmly enough, but waves of panic peak and break each time Dean Tzenos sings the refrain. His voice becomes exceedingly frantic as his prospects grow more and more dim– his questioning never gets an answer, save for the weight of what’s left unsaid.

When it came time to perform Odonis Odonis’ 2011 debut, Hollandaze, Tzenos recruited the help of Denholm Whale and Jarod Gibson, local musicians who he knew he could trust to bring a live intensity and craft to his songs. The band supported the record all over North America and Europe with the likes of A Place to Bury Strangers, The Soft Moon, Ty Segall, and Chelsea Wolfe, as well as fellow Torontonians Metz.

“Are We Friends” is the next step for the band, following the release of their Better EP, which came out in April 2013 via Buzz Records.