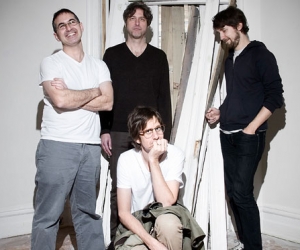 On September 10th, 2013, Sub Pop will release Obits’ 3rd album, Bed & Bugs, via CD, LP and digital. The 13-track album,  featuring highlights “It’s Sick,” “Taste The Diff,” and “Receptor,”  was recorded and mixed in an undisclosed location in Arlington, VA by Nikhil Ranade with additional mixing by Eli Janney and Geoff Sanoff.

You can now preorder Obits Bed & Bugs via Sub Pop.com. While supplies last, orders of the CD and LP will receive a limited edition 7” single featuring live versions of “Refund” (previous 7″) and “Talking To The Dog” (from I Blame You) on the A-side with “New August” (from Moody, Standard And Poor) on the B-side.  The tracks were recorded while on tour August 2012 at Red 7 in Austin, Texas.  3 brand new Obits t-shirts are also available now.

Bed & Bugs will be available as a limited Loser Edition colored version of the LP from SubPop.com, select independent record retailers (call your local record store for availability) and at Obits’ shows.

13. Double Jeopardy (For The Third Time)

Obits have a few dates to mention at this time: A hometown album release show on September 21 in Brooklyn, NY at The Bell House. October 30 in Tampa, FL and October 31  in Gainesville, FL for both city editions of The Fest. We’ll announce more dates shortly.