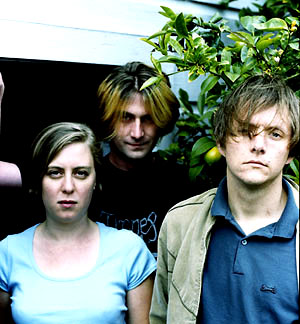 In the fall of 2013, The Numero Group will begin a lengthy campaign to reissue the complete works of seminal Olympia, Washington, post-punk trio Unwound. Their seven albums – Fake Train, New Plastic Ideas, S/T, The Future Of What, Repetition, Challenge For Civilized Society, and Leaves Turn Inside You – will be expanded, remastered, and annotated in typical Numero fashion. Kicking the series off is the first ever release of Unwound’s Tumwater High-era recordings, all under the name Giant Henry.

“Tumwater High has always been known as a ‘redneck’ school,” reflects guitarist/vocalist Justin Trosper in the album’s liner notes. “People took football and AC/DC equally seriously. The smoking area was rich in facial hair. We were into punk rock but we weren’t really ‘punk.’ We thought punk was funny. After all, this was the late-’80s. Post-punk was a memory, and everything was totally damaged and weird. We were kind of more with the times than the catalog-punks with mohawks and bondage pants.”

Recorded in original Unwound drummer Brandt Sandeno‘s parents’ basement over one weekend in the winter of 1991, the 12-song vinyl-only album captures Vern Rumsey and Justin Trosper in their Metal Circus and Bleach-influenced halcyon days. In true DIY spirit, Numero has hand-screened the entire pressing of 1050 LPs, which includes three cover variants.