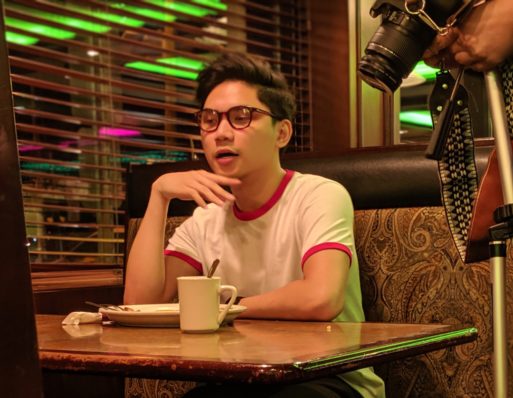 NovaBound releases his debut first full-length, Sevenths, on November 22nd 2019. The musical project of Andrew Agulto, along with younger brother Arthur on guitars and Kevin Basko (of Rubber Band Gun) as his mentor in the studio. In his early years, Agulto learned how to play piano, wit the influences of Koji Kondo, Kazumi Totaka, and other Nintendo music which led to a fascination with orchestration. Ahead of Sevenths arrival, NovaBound has shared the lead-single “Under The Sun.”

In high school he would self-discover The Beatles and would end up making his own “LOVE”-letter mash-up album, Today and Tomorrow, which would further familiarize himself with production. Andrew didn’t write music until Sevenths which is the result of his first bad break-up from a major relationship in 2015 and the culmination of his past experiences.

Andrew Agulto on “Under The Sun:”

There’s almost an endless list of influences for this track. The most blatant ones would be The Beach Boys, The Strokes, maybe a little John Lennon (Don’t Let Me Down/Hold On), and while it wasn’t directly intentional the Mark Ronson/Amy Winehouse version of “Valerie.” During the sessions one of the engineers, Rias, sang verse two like “Jesus Christ my savior.. can walk across the water” which I thought it was endlessly hilarious. There’s an under lying idea that it’s a water level; the bass line in the chorus is very reminiscent of Jolly Roger Bay from Super Mario 64 and the piano break mid-way through was my best attempt at pretending to make a title theme for a fake Wii Sports game. I actually enlisted the help of Sam Miller and his Donkey Kong Country OST restoration project who was able to recreate studio-grade sounds compared to the game’s original compressed 16-bit quality. He was able to lend me some high quality isolated instrument tracks for some familiar sounds I tucked into the chorus. The beach/wave sounds sample is a mix of a few different undisclosed things (but I’ve included a hint).

“Under The Sun” is part of a break-up album called Sevenths that loosely mirrors the stages of grief during it’s run-time. Here we have anger (or at least my best attempt at it being angry). I’m being judgmental towards some choices that were made but truth be told things stopped being my business very quickly. It got rather dark after the split so I offer a prayer in verse two although I can’t help myself from being passive aggressive. California is actually Florida in real life but California is a lot more catchier.